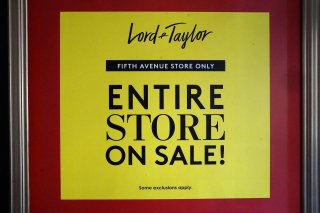 Since the start of the coronavirus pandemic, several well-known retail brands have either declared bankruptcy or come close to doing so. Among those are such firms as J. Crew, J.C. Penney, Neiman Marcus and Brooks Brothers, most of which were struggling to some degree even before the pandemic.

Over the weekend, two more companies joined the list of those declaring bankruptcy: Lord & Taylor, and Tailored Brands, the parent company of men's wear concerns Men's Wearhouse and Jos. A Bank.

Lord & Taylor, a clothing retail chain that dates back to the nineteenth-century and is America's oldest continuously operating department store, filed for bankruptcy in Virginia on Sunday.

Le Tote Inc., the France-based subscription fashion service that bought Lord & Taylor last year, also filed for bankruptcy. The company will submit a plan to the court, according to the documents. The company has thirty-eight remaining stores as of the time of the filing.

Tailored Brands, which also owns Moores Clothing for Men and K&G Fashion Superstore, filed the Chapter 11 petition as part of a deal to implement what it called a "pre-arranged financial restructuring plan."

The announcements come as sales of apparel have plunged since the start of the pandemic.

"As evidenced by the positive results we saw in January and February, we have made significant progress in refining our assortments, strengthening our omni-channel offering and evolving our marketing channel and creative mix. However, the unprecedented impact of COVID-19 requires us to further adapt and evolve," Tailored Brands President and CEO Dinesh Lathi said as part of the announcement.

"Reaching an agreement with our lenders represents a critical milestone toward our goal of becoming a stronger Company that has the financial and operational flexibility to compete and win in the rapidly evolving retail environment."

Tailored Brands came into existence in 2016 when Men's Wearhouse switched a holding company model. It had acquired the other brands over the course of the previous few years, while George Zimmer, the founder of the company who long starred in its TV commercials, was pushed out of Men's Wearhouse in 2013.