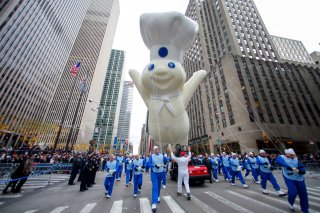 The iconic Macy’s Thanksgiving Day Parade—a celebratory practice dating back to 1924—will not be live this year as the ongoing coronavirus risks squash any forms of massive, large gatherings.

The department store released a statement saying it had to “reimagine” the upcoming parade that’ll take place on Nov. 26—adding that this is the “first time in its more than 90-year history” that it had to be modified—and noted it’ll mirror the “safe and innovative” ideas that were practiced at its Fourth of July fireworks event.

“Following our successful, safe and innovative production of Macy’s 4th of July Fireworks, it is our intention to similarly reimagine Macy’s Thanksgiving Day Parade this November,” Macy’s said in a statement.

New York City Mayor Bill de Blasio addressed the announcement at a coronavirus press conference Monday, emphasizing that viewers will still be able to “feel the spirit and joy of that day,” despite not being at the parade in-person.

“One of the most beloved events every year is the Thanksgiving Day Parade. I always want to express my appreciation to everyone at Macy’s. They are extraordinarily civically-minded. . . . We saw what they did on July 4 with an amazing fireworks display,” de Blasio said.

“They’re gonna do the same thing again with the Thanksgiving Parade. It will not be the same parade we're used to. It will be a different kind of event. They’re reinventing the event for this moment in history,” he added.

The traditional 2.5-mile parade route that begins near Central Park on Manhattan’s Upper West Side will not be a part of this year’s event, organizers said. Instead, parade events will be staged and recorded over the course of two days, with the total number of participants reduced 75 percent compared to last year. Macy’s said, “all participants will be appropriately socially distanced.”

“This year the celebration will shift to a television only special presentation, showcasing the Macy’s Parade’s signature mix of giant character helium balloons, fantastic floats, street performers, clowns and heralding the arrival of the holiday season with the one-and-only Santa Claus,” the retail giant said.

High school and college out-of-state marching bands will not perform at the event, as their performances have been postponed to 2021. Local musical performers will take their place.

The parade’s enormous balloons will float “without the traditional 80-100 handlers,” according to Macy’s. Instead, Macy’s will work with New York City police and transportation officials to employ a “vehicle framework of five specialty vehicles” that’ll secure the balloons.

The event will still be televised on NBC at 9 a.m. ET.

“There are some things we still can’t do. We still can't have the kind of large gatherings that are some of the high points of this year,” de Blasio said. “Any year would normally have the parades and the major community events. Those kinds of things still have to wait. We’re looking forward to a lot of them coming back in 2021.”