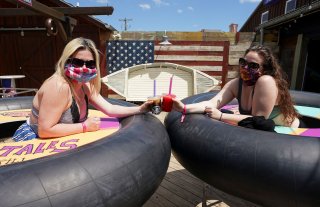 Maryland Gov. Larry Hogan (R) announced Thursday that the state experienced a full day without any reported coronavirus deaths for the first time since March 28, while other states simultaneously approached their peaks in the number of cases or deaths relating to the deadly disease.

“This encouraging milestone is a tribute to the incredibly heroic efforts of our doctors, nurses, and health care workers on the front lines, and the courage and perseverance Marylanders have demonstrated in response to this unprecedented challenge,” Hogan said in a statement.

“As we continue on our road to recovery, it is absolutely critical for all of us to remain vigilant,” he added.

Maryland has 125,510 confirmed coronavirus cases, with 785 reported on the last day, bringing the testing positivity rate to 2.88 percent, according to state data. There have been 3,805 deaths and there are currently 331 people hospitalized for the virus.

While Maryland has experienced widespread success in combating the virus due to Hogan’s aggressive response to it, more than twenty states are seeing a rise in the number of confirmed cases or deaths caused by the infection, according to Johns Hopkins University coronavirus data.

During the month of September, North Dakota experienced nearly an 80 percent increase in the number of confirmed coronavirus cases. On August 31, the state reported under twelve thousand cases, but at the end of September, North Dakota reported more than twenty thousand—that’s a massive increase in just one month. Monthly deaths also rose, as May’s monthly figure doubled in September.

Wisconsin also hit some record-setting numbers, as 125,161 people tested positive, with 7,409 patients hospitalized and 1,348 fatalities, up twenty-one deaths from one day earlier.

The Tennessee Department of Health reported 197,432 coronavirus cases on Thursday, with 2,501 deaths, bringing the positivity rate to 7.31 percent. The department also reported that Tennessee—a state that doesn’t have a statewide mask mandate—experienced its deadliest month during September, as the state announced an average of twenty-three deaths per day and reported its second-highest day spike of fifty-seven deaths on Sept. 10.

Other states like Arkansas, Minnesota, Mississippi, Florida and South Dakota are also seeing surges in confirmed coronavirus cases and deaths as of Thursday.

Locals in these states say increases in hospitalizations, crowded hospital units and an increase in the number of positive tests have contributed to the spikes in overall deaths in each state.

A Wisconsin-based doctor studying the impact of the coronavirus credited the upswing in coronavirus cases and deaths due to the lack of medical resources in the state, compared to major cities that have a massive staff of nurses and doctors with stockpiles of medical equipment.

“But if you look at large cities in Texas such as Dallas, when they have a 20 percent positivity rate, their health care systems are significantly larger than ours. We’re not really designed for that here in Brown County,” Dr. Ashok Rai, president and CEO of Prevea Health, told a local network on Thursday.

Brown County has the third-highest number of confirmed coronavirus cases, according to the state’s data.

Public health experts in North Dakota point to the fact that the state has few coronavirus restrictions, including no limitations on travel, the scope of gatherings or the reopening of businesses. North Dakota residents blame the governor’s “lack of leadership” during the pandemic, as the state doesn’t have a statewide mask mandate.

The coronavirus still remains a pressing concern for voters heading into the election. To date, it has infected more than 7.3 million Americans and killed nearly 207,000 people. President Donald Trump’s response to the deadly infection has been a major weakness for him given that many Americans believe he downplayed the threat of the virus when it first struck the United States back in February and failed to implement a national response strategy to mitigate its spread.