Meet the ‘Glamour Boys' Who Warned Britain about Nazism 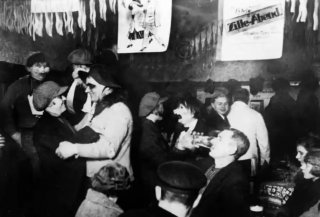 In the 1920s and 1930s of buttoned-up Britain, homosexuality was an illicit act, and would remain that way until 1967 when the law changed in England and Wales. Even though gay culture was vibrant, it existed mostly underground, its community forced to socialise with a certain degree of covertness in order to avoid exposure and the risk of prison.

Berlin, meanwhile, had emerged from the dark years following the first world war as a cultural hub of creativity and intellectualism, attracting pioneers in the fields of science, psychology, art and literature. The German capital was also a hotbed of hedonism where sexual freedoms and gay culture flourished, and where exciting new forms of music and dance contributed to the febrile atmosphere.

On visits to this liberal metropolis during that period, a small group of young British Conservative Party MPs – which included figures such as Ronald Cartland, Anthony Muirhead and Robert Bernays – began to witness the growing persecution of certain groups in Germany, including homosexuals and Jews.

This group of Conservative MPs was scathingly dubbed the “Glamour Boys” in 1938 by their own leader Neville Chamberlain, the then prime minister. Chamberlain, who would become the eventual architect of appeasement in the autumn of 1938, even threatened the group with deselection. The story of the Glamour Boys provides a striking example of how the political establishment was prepared to publicly disparage members of their own party.

Yet, despite the risk of exposing their own homosexuality at a time when it was illegal, the Glamour Boys brought their concerns to parliament throughout the 1930s. The rise of the Nazi party to power in 1933 marked the end of the Weimar Republic that had witnessed the cultural explosion of Berlin. A crackdown on gay culture in Germany saw the detainment of homosexuals, alongside police raids on popular bars and nightclubs.

But opposition to the rise of Hitler was certainly not the prevailing attitude in Britain at the time, either at Westminster or in public. There was plenty of enthusiasm for the Führer among certain sections of British society including the Duke and Duchess of Windsor who met Hitler in Germany in 1937. Yet, even though the concerns of the Glamour Boys were vindicated as the 1930s and 1940s progressed, British history has failed to appreciate their prescience in the same manner as it has figures such as Winston Churchill.

The activity of the Glamour Boys peaked between 1938 and 1940, as Europe accelerated towards war. The Whitehall Newsletter provided a mouthpiece through which the group voiced their concerns at the growing threat of Nazism. The group was also prominent in parliamentary debates during the period, including those in 1938 surrounding the Munich Agreement which allowed German annexation of the Sudetenland, in western Czechoslovakia.

This group of young MPs provided essential critical mass to the dissenting anti-appeasement movements within the House of Commons, which came to be spearheaded by the likes of Anthony Eden and Winston Churchill. Without such backing, the two would have remained voices in the wind until the outbreak of war in 1939 became imminent.

The opposition to the rise of Nazism offered by Winston Churchill throughout his wilderness years of the 1930s has been well-documented. In a famous speech of November 1934, he expressed concern at rapid German rearmament. In British historical memory, Churchill has come to be viewed as a prophet of the horrors that were yet to unravel.

But the foresight and instincts of the Glamour Boys have faded from public memory. The story has only recently garnered attention, in large part thanks to the research of current Labour MP Chris Bryant whose book, The Glamour Boys: The Secret Story of the Rebels Who Fought for Britain to Defeat Hitler, sheds light on the story.

We should question why the Glamour Boys have not occupied a more prominent position in narratives of the second world war era. Churchill’s political renaissance and redemptive rise to prime minister naturally magnified his own actions in the 1930s. This has likely come at the historical expense of other groups such as the Glamour Boys, who had also been vocal in their opposition to Nazism at the time.

It seems plausible that the sexuality of the Glamour Boys has prevented them from receiving their historical place. LGBT+ histories have not been well-accommodated in British narratives of the past. Only legalised in England and Wales in 1967, homosexuality remained taboo in the decades that followed. The fact that that the contemptuous moniker “Glamour Boys” endures perhaps speaks for itself.

Similarly, gay wartime codebreaker Alan Turing was only granted a posthumous royal pardon in 2013 for his conviction for gross indecency in 1952, which resulted in his brutal chemical castration.

An opportunity to reflect

Every February, LGBT+ History Month offers a chance to reflect on society past and present, and consider how certain stories have been airbrushed from national history. The political views and sexual orientation of the Glamour Boys have been marginalised, both at the time and retrospectively, despite their important contribution to British society. We need to reflect on how enduring social prejudices have shaped the way in which the nation remembers its past.

The Glamour Boys offer just one opportunity – among many – to diversify entrenched national narratives. There is danger in ignoring the voices of marginalised groups, and continual effort is required to eradicate unconscious bias in whichever context it might appear. It also provides a reminder of why history must feature narratives that contain multiple voices and perspectives, besides those of the status quo.

Above all, the story of the Glamour Boys is one of bravery. The courage displayed by this group of MPs extended well into the second world war, when several were killed in military action. In a time when homosexuality was prohibited, this group of young gay MPs risked their liberty – and later their lives – in the pursuit of social and political justice.