Much-Cited Study on Ivermectin and Infertility Is Old, Less than Relevant 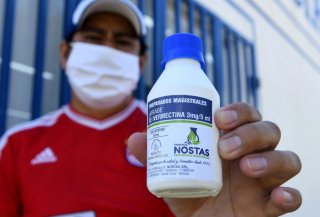 Ivermectin has had a strange life in the coronavirus era. The antiparasitic drug has some uses in humans but is mostly known as a veterinary drug. At some point, like hydroxychloroquine before it, Ivermectin began to get attention in some quarters as an alternative treatment for coronavirus. And this has led to some humans using the horse version of the drug—with very unfortunate results.

The culture war over Ivermectin hit another level when comedian and podcaster Joe Rogan announced that he had taken it after he contracted the coronavirus.

“There seems to be a growing interest in a drug called ivermectin for the prevention or treatment of COVID-19 in humans,” the FDA website says. “Certain animal formulations of ivermectin such as pour-on, injectable, paste, and “drench,” are approved in the United States to treat or prevent parasites in animals. For humans, ivermectin tablets are approved at very specific doses to treat some parasitic worms, and there are topical (on the skin) formulations for head lice and skin conditions like rosacea.”

“However, the FDA has received multiple reports of patients who have required medical attention, including hospitalization, after self-medicating with ivermectin intended for livestock… The FDA has not authorized or approved ivermectin for use in preventing or treating COVID-19 in humans or animals. Ivermectin is approved for human use to treat infections caused by some parasitic worms and head lice and skin conditions like rosacea.”

Meanwhile, some of the stories that have emerged about Ivermectin have turned out not to be true. One about emergency rooms in Oklahoma backed up, due to Ivermectin overdoses, didn’t check out, per CNN.

There was another such viral story this week. A Twitter user named Ron Filipkowski had a viral tweet this week stating that “a new study by researchers at three universities have concluded that ivermectin causes sterility in 85% of men.” That tweet linked to a local news story for KTSM, part of Nextar Media, and was shared on other stations owned by that company.

But that story, at least after a correction and retraction, made a few things clear—the study was not “new”—it was from 2011, ten years ago. And it took place in Nigeria. And, it didn’t exactly meet the FDA’s standards.

“A national story regarding Ivermectin and a study regarding its effect on men’s reproductive health that KTSM published, has been removed from our website,” the correction said. “Concerns over the scientific research methods, the veracity of the original, peer-reviewed report and public statements by the Food and Drug Administration (FDA) saying that infertility is not a known side effect of Ivermectin all led to our editorial decision to remove the story.”