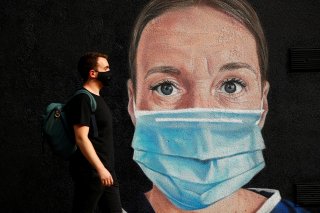 Nearly 300,000 Americans could be dead from the novel coronavirus by December 1, according to new data from the Institute for Health Metrics and Evaluation (IHME) at the University of Washington’s School of Medicine.

The U.S. has by far the most COVID-19 cases in the world, with nearly 5.1 million confirmed infections and more than 163,000 deaths, according to the latest data from Johns Hopkins University.

There are more than 19.9 million confirmed cases of coronavirus worldwide, including at least 732,000 deaths.

The new data, however, predicts that consistent mask-wearing by 95% of the U.S. population has the potential to save roughly 70,000 lives.

“It appears that people are wearing masks and socially distancing more frequently as infections increase, then after a while as infections drop, people let their guard down and stop taking these measures to protect themselves and others—which, of course, leads to more infections. And the potentially deadly cycle starts over again.”

Murray noted that there currently appear to be fewer transmissions of the virus in certain states, such as Arizona, California, Florida and Texas, but the overall infection and mortality rates across the United States are expected to continue to climb for the next week or two.

The fall in infection rates in some states is likely driven by the combination of local mask mandates, bar closures and more responsible behavior by the general public.

“The public’s behavior had a direct correlation to the transmission of the virus and, in turn, the numbers of deaths,” Murray said.

“Such efforts to act more cautiously and responsibly will be an important aspect of COVID-19 forecasting and the up-and-down patterns in individual states throughout the coming months and into next year.”

Since July 15, several more states have passed mask mandates. IHME’s statistical analysis suggests that mandates with no penalties increase mask-wearing by eight percentage points, but the figure jumps to fifteen percentage points when penalties are added.

“These efforts, along with media coverage and public information efforts by state and local health agencies and others, have led to an increase in the U.S. rate of mask-wearing by about five percentage points since mid-July,” Murray said.

The U.S. Centers for Disease Control and Prevention also recently released an ensemble forecast that projects 181,031 deaths by August 29.

“State-level ensemble forecasts predict that the number of reported new deaths per week may increase over the next four weeks in Hawaii and Puerto Rico and may decrease in Florida, Mississippi, New Mexico, the Northern Mariana Islands, Ohio, Texas, Vermont and the Virgin Islands,” the CDC said on its website.