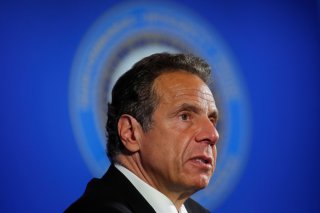 New York is preparing for a devastating double whammy of the ongoing coronavirus pandemic and the fast-approaching flu season.

State health authorities are “very concerned” about the surge in flu cases and have warned that it will make the coronavirus pandemic more complicated “in many ways.”

“You’re in the flu season. Everybody is sneezing, everybody is coughing and everybody has a runny nose. Who has the flu and who is possibly COVID positive? It becomes a much more difficult calculus,” New York Governor Andrew Cuomo said during a news briefing on Monday.

Cuomo admitted that many of the testing facilities that are being used for the coronavirus, also known as COVID-19, have also been counted on heavily during past flu seasons.

“They are going to turn around and say to me, ‘I can’t do a hundred COVID tests anymore. I can only do sixty COVID tests because I have to do forty flu tests,’” he said.

Once the epicenter of the U.S. outbreak, New York now boasts one of the lowest infection rates in the nation. On Sunday, the state’s infection rate sat at only 0.7%, Cuomo noted.

Health officials and doctors have been sounding the alarm that battling two different viruses simultaneously has the potential to overwhelm the U.S. health-care system. There had been hope that the coronavirus would abate during the summer months, but that has not happened.

However, global efforts to stymie the further spread of the coronavirus—which include face-mask mandates, social-distancing measures and stay-at-home directives—could mean that the United States is in for a milder flu season, which countries in the Southern Hemisphere are already witnessing.

On average, between nine and forty-five million Americans catch the flu each year, which leads to anywhere between twelve thousand to sixty-one thousand deaths. According to the U.S. Centers for Disease Control and Prevention, between October 2019 and April 2020, there were an estimated thirty-nine to fifty-six million influenza infections and twenty-four thousand to sixty-two thousand fatalities.

CDC Director Dr. Robert Redfield told WebMD in an interview last week that the United States is preparing for “the worst fall, from a public health perspective, we’ve ever had.”

The coronavirus has continued to rapidly spread across the United States, infecting more than 5.5 million Americans and killing at least 170,000, according to data compiled by Johns Hopkins University.

Globally, there are more than 21.9 million confirmed cases, including at least 775,000 related deaths.