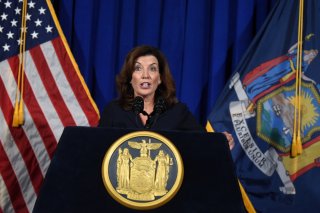 New York Gov. Kathy Hochul on Friday declared a state of emergency over a polio outbreak in hopes of boosting vaccination rates in the state, according to a CBS News report.

The order will allow emergency medical services workers, midwives, and pharmacists to administer the polio vaccine and will permit doctors and nurse practitioners to issue standing orders for the inoculations.

State health officials said all unvaccinated New York residents—including children over two months of age, pregnant people, and those who haven't completed their vaccine series—should get their shots immediately. They also urged booster doses for certain individuals, such as health care workers in affected areas who treat patients who might have polio.

“If you or your child are unvaccinated or not up to date with vaccinations, the risk of paralytic disease is real. I urge New Yorkers to not accept any risk at all,” she continued.

Officials noted it is possible that hundreds of people in the state have gotten polio but are unaware that they are infected. Most people with the disease have no symptoms but can still transmit the virus to others for days or weeks.

According to the state health department, the goal of the vaccination campaign is to eventually achieve immunization rates well above 90 percent statewide.

“Polio immunization is safe and effective—protecting nearly all people against disease who receive the recommended doses,” Basset said. “Do not wait to vaccinate.”

Once a common virus, polio is largely spread through contaminated water and food or contact with an infected person. In some young children, the disease can affect the nerves and cause muscle weakness or paralysis, which can sometimes be fatal. There is no cure, but it is easily preventable by the polio vaccine, which became available starting in 1955.

In 1952, during one of the most severe polio outbreaks in U.S. history, the virus infected nearly 60,000 people, paralyzed more than 21,000, and killed more than 3,100. In 1979, polio was declared eliminated in the United States, meaning that there was no longer any routine spread of the disease.