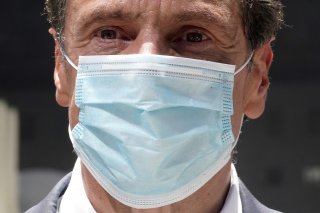 New York Gov. Andrew Cuomo has been placed in the national spotlight in recent months due to his coronavirus pandemic response, which has inspired him to write a book that details his experiences under pressured leadership and his relationship with President Donald Trump.

The third-term governor has been applauded for his straightforward, yet comforting press conferences that updated New Yorkers on the intensity of the coronavirus.

"In his own voice, Andrew Cuomo chronicles in ‘American Crisis’ the ingenuity and sacrifice required of so many to fight the pandemic, sharing his personal reflections and the decision-making that shaped his policy, and offers his frank accounting and assessment of his interactions with the federal government and the White House, as well as other state and local political and health officials,” Crown Books said in a statement Tuesday.

“The questions are what do you do with the fear and would you succumb to it,” Cuomo wrote in an excerpt shared with The Associated Press. "I would not allow the fear to control me. The fear kept my adrenaline high and that was a positive. But I would not let the fear be a negative, and I would not spread it. Fear is a virus also.”

Cuomo said last month that he was considering writing a book that showed the “entire experience, because if we don't learn from this then it will really compound the whole crisis that we've gone through,” he said during an interview with WAMC.

The news surfaced just one day after the governor spoke at the Democratic National Convention, where he coined a metaphor for the spread of the virus to a weakened country.

“We know that our problems go beyond the COVID virus. COVID is the symptom, not the illness. Our nation is in crisis. And in many ways, COVID is just a metaphor. A virus attacks when the body is weak and when it cannot defend itself. Over these past few years, America’s body politic has been weakened. The divisions have been growing deeper,” he said during his speech.

Cuomo and Trump have torn into each other’s coronavirus responses, as Cuomo has noted the president is “in denial” about the seriousness of the virus, while Trump attributed Cuomo’s “poor management” to New York’s climbing deaths from COVID-19.

New York has become one of the safest places in terms of taming the coronavirus, compared to being the epicenter when the pandemic first struck the US. Although the state has more than 30,000 reported deaths -- more than anywhere else in the country -- New York reported just five deaths on Aug. 14, a significant drop from figures in April that hovered around 700 fatalities per day.

Despite the drop in coronavirus deaths, Cuomo has drawn criticism for his handling of nursing home fatalities, as a recent AP investigation discovered New York’s death toll of coronavirus-related deaths in those facilities could be significantly underreported.

"Unlike every other state with major nursing home outbreaks, New York only counts resident deaths that occur in the home, not in hospitals. That could make New York's official toll, already among the nation's highest, a significant undercount," AP tweeted.

Cuomo has declined calls into the investigation, as he and his administration believe the condemnation of his management in nursing homes is “all politically motivated.”