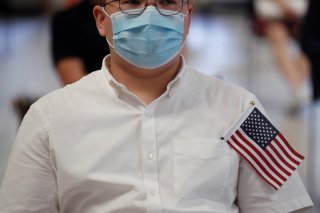 The United States surpassed the grim milestone of five million coronavirus cases over the weekend.

The country, which represents about a quarter of all COVID-19 infections in the world, has seen more than 163,000 deaths related to the contagion, according to the latest data from Johns Hopkins University.

There are more than 19.9 million confirmed cases of coronavirus worldwide, including at least 732,000 fatalities.

The pandemic is showing no signs of slowing down. It took only six weeks for the number of coronavirus infections to double in the United States, which has witnessed a million new cases just in the last two weeks. Since July 21, there have been only four days in which the United States did not report more than 1,000 deaths.

As of this week, five states—California, Florida, Texas, New York and Georgia—account for more than 40% of all infections in the United States.

However, U.S. health officials, including White House coronavirus task force coordinator Dr. Deborah Birx and advisor Dr. Anthony Fauci, are now fearing that the virus may be taking aim at other states.

New data is showing that states like Ohio, Tennessee, Kentucky and Indiana are seeing upticks in overall positivity rates.

To limit the further spread of the virus, Fauci advised these states to reexamine where they are in the process of reopening businesses and schools.

“You may need to pause, you may need to drop back a little bit,” the seventy-nine-year-old infectious disease expert said during an interview with the Journal of the American Medical Association last week.

“I don’t think you necessarily have to revert to go all the way back to reclosing.”

Positive steps, however, are being made in some states. New York, once the nation’s epicenter of the virus, has been eclipsed by several other states that that have seen surging cases in recent months. On Sunday, New York reported a positivity rate of only 0.78%, the lowest percentage since the pandemic began.

“Our daily numbers remain low and steady, despite increasing infection rates across the country, and even in our region—and we had the lowest one-day positive rate since we started,” New York Governor Andrew Cuomo said in a statement.

“That’s an incredible achievement, all thanks to the hard work of New Yorkers.”