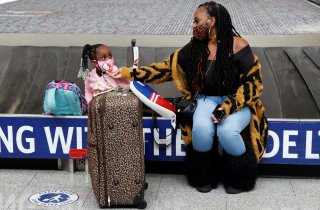 The Centers for Disease Control and Prevention (CDC) updated its guidance on holiday celebrations and small gatherings last week, encouraging Americans to celebrate Thanksgiving “at home with the people you live with.” Despite the recommendations, the Transportation Security Administration (TSA) saw the highest recorded number of travelers during the coronavirus pandemic this past weekend leading up to the holiday.

“TSA will continue working to make the checkpoint experience as safe and secure as possible for those who choose to travel despite CDC and others who are urging people to avoid holiday journeys. The agency has been managing passenger volumes that exceed 900,000 a day frequently since the Labor Day holiday, and has made checkpoint modifications to handle the additional travelers,” an administration spokesperson told the National Interest via email.

The spokesperson added that many airports have increased the number of TSA officers, so staffing is available at every checkpoint lane to reduce congestion and boost social distancing measures. TSA also launched the “Stay Healthy. Stay Secure” campaign in June that aided the installment of acrylic barriers and “touchless technologies” to “enhance security and reduce the need for physical contact between TSA officers and passengers,” according to the spokesperson.

“It was the highest since the steep decline due to the pandemic and the second time in three days that checkpoint volume surpassed 1 million,” TSA spokeswoman Lisa Farbstein tweeted Monday.

But TSA Administrator David Pekoske noted last week that he anticipates these numbers to skyrocket the Wednesday before Thanksgiving and the Sunday after.

CDC guidelines suggest celebrating the holiday at home, as spending it with “family and friends who do not live with you can increase the chances of getting or spreading COVID-19 or the flu.” The U.S. just surpassed 12.5 million confirmed cases and more than 258,000 deaths as the country drowns in a brutal second wave of the deadly disease. Johns Hopkins University coronavirus data reported an average of nearly 170,000 cases per day in the U.S., pushing it to be the leader in the number of confirmed infections worldwide.

“Federal and state health officials are strongly advising against holiday travel. Celebrating is safer if limited to members of your immediate household. We want families across our state to enjoy the holidays, but in a safe way,” Hogan tweeted on Monday.