Omicron Expected to Triple the Previous Record of Cases 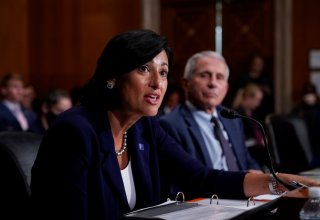 Coronavirus cases in the United States are expected to hit a new record that is three times greater than the previous record for the seven-day average of new cases. That’s according to the Wall Street Journal, which said that the average hit 700,000 cases on Saturday. The first million-case day of the pandemic was reported early last week by Johns Hopkins University, which tracks the daily status of the pandemic using state-reported data.

According to the Journal, at least forty of the fifty states are “either at or near” record case levels.

Meanwhile, the head of the Centers for Disease Control, Dr. Rochelle Walensky, said at a briefing Friday that the rapidly rising case count could fall just as fast. According to NBC News, Dr. Walensky said that the current wave could resemble an “ice pick,” with the case count peaking quickly and then dropping. The trajectory of the wave followed this pattern in South Africa, where Omicron first surfaced in November. The Omicron cases in that country appear to have passed their peak, without any major surge in deaths, although it’s not clear that the United States will follow the same trajectory.

“I do think in places that we are seeing this really steep incline, that we may well see also a precipitous decline,” the CDC director said. Walensky also said that while children are still hospitalized less often than any other age group, the pediatric hospitalization rate is lower now than at any other phase of the pandemic.

“This virus has changed, and it’s constantly throwing up curveballs,” Walensky said at the briefing. “As the virus changes, the science changes.”

Dr. Walensky was also heavily criticized for recently saying that it is “really encouraging news in the context of Omicron” that “the overwhelming number of deaths, over 75 percent, occurred in people who had at least four comorbidities.”

The director was stating that the variant is unlikely to lead to death for those without such comorbidities, but per Newsweek, the comment led to a backlash from those who are disabled or chronically ill. Walensky later tweeted about the need to protect those with comorbidities from severe outcomes from COVID-19.

The way our understanding of the pandemic is continually changing was the subject of a New York Times piece over the weekend. As the Omicron variant is believed to be less deadly but more transmissible, the calculus of how dangerous it is and how quickly it spreads is evolving. Because the Omicron era is so different from past periods of the pandemic, with rules and guidance changing frequently, many Americans have been left confused.

While case counts are climbing quickly, death rates have not yet climbed along with cases, and most major events aren’t being postponed. Except for in cases when too many players have tested positive for teams to play games with full rosters, professional sports have mostly proceeded as scheduled.

As of last week, Omicron made up about 95 percent of the overall number of coronavirus cases in the United States.

The Question of Schools

That comes as controversy is continuing about what approach schools should take during the Omicron surge. While most political leaders, including President Biden, have prioritized keeping schools open, some teachers unions have pushed for closures as school districts and boards wrestle with how best to handle positive cases.

In many parts of the country last week, schools had to switch to virtual learning because not enough teachers were available. In Chicago, schools have been closed for nearly a week amid a labor dispute between the mayor and the Chicago Teachers Union, per Axios.

Meanwhile, while Australia was often treated as a success story during earlier phases of the pandemic, the country is now struggling with Omicron, per a Reuters report over the weekend. Australia passed the 1 million mark in cases last week, with about half of those reported in the week before.

“Omicron is a gear change and we have to push through,” Prime Minister Scott Morrison said in a briefing last week. “You’ve got two choices here: you can push through or you can lockdown. We are for pushing through.”

Australia’s strict lockdown measures led the country to block the entry visa for tennis star Novak Djokovic, who was planning to come to the country to play in the Australian Open. On Monday, per the AP, a judge ruled that Djokovic can stay in Australia. While the tennis player is not fully vaccinated, he recently recovered from COVID-19.