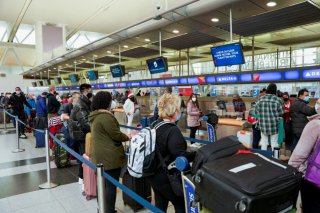 The Omicron variant, which is currently running wild around the United States, affected the Christmas holiday for many people who tested positive and therefore were not able to see family. For many others, though, their Christmas was hurt more indirectly by Omicron, due to canceled flights.

According to FlightAware data cited by Slate, a total of 5,700 flights were canceled around the world on Friday, Saturday, and Sunday. The reason for many of the cancellations was that crews and staff for airlines and flight crews were affected by personnel calling out due to Omicron infection.

“The nationwide spike in Omicron cases this week has had a direct impact on our flight crews and the people who run our operation,” a memo from United Airlines that was obtained by the media last week said.

Per CNN, this led to holiday travel falling far below 2019 levels, even though overall travel for the year exceeded that of the most recent pre-pandemic year.

The TSA said that about 1.7 million people were screened at airport checkpoints on Friday, which per CNN is down from the 2.6 million that passed through in 2019. That number in 2020 was just 846,520.

Meanwhile, the New York Times reported over the weekend on what nursing homes are doing amid the Omicron surge. Nursing homes, of course, were hit hard by the virus in its initial surge in early 2020, and once vaccines first became available, nursing home residents were among the first to receive the dose.

Per the Times, one nursing home facility in Brooklyn that lost more than 100 residents in the pandemic has had trouble getting its residents boosted. Of the current 274 residents at Sea Crest Nursing and Rehabilitation, only 52 have received the booster. The low number was attributed to “vaccine hesitancy among residents or their families, and residents being ineligible because they recently received second vaccine doses or monoclonal antibodies.”

In New York, health officials are calling for booster shots for the most vulnerable, nursing home residents included.

As of last week, Omicron was the dominant variant in the United States, taking up seventy-three percent of cases, when that number had been in the low single digits as little as a week earlier, the Centers for Disease Control and Prevention (CDC) said. About ninety-nine percent of infections were caused by the Delta variant, as of the end of November, which was around when Omicron was first reported in November.

“All of us have a date with Omicron,” Dr. Amesh Adalja, a senior scholar at the Johns Hopkins Center for Health Security, said, per the AP. “If you’re going to interact with society, if you’re going to have any type of life, Omicron will be something you encounter, and the best way you can encounter this is to be fully vaccinated.”