Poll: More Americans Willing to Get Vaccinated but Divided on Timing 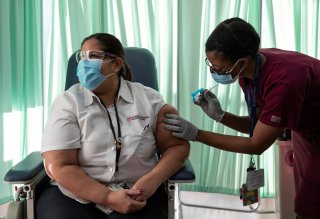 More than eight in ten Americans are now saying that they are willing to get vaccinated against the coronavirus, according to a new ABC News/Ipsos poll.

The biggest surprise of the poll was that only 15 percent were found to refuse the vaccine entirely, a reflection of growing confidence in the rapidly developed coronavirus vaccine that is seen as a crucial turning point in the ten-month-long pandemic.

The virus has already infected more than sixteen million Americans and killed more than three hundred thousand, according to the latest data from Johns Hopkins University. The poll noted that roughly two-thirds of Americans admitted that they or someone they know has been infected by the virus.

Among individuals who have been closely hit by the pandemic, 45 percent said they would receive the vaccine now, while those have not contracted the virus or do not know someone who has, only 30 percent were willing to get inoculated.

The poll also found that political party affiliation and education level play a large role in who aims to get vaccinated.

Republicans (26 percent) are four times as likely as Democrats (6 percent) and nearly twice as likely as Independents (14 percent) to flat-out refuse a coronavirus vaccine. Among those with at least a bachelor’s degree, about 90 percent were willing to get vaccinated, while 80 percent of those with a high-school degree or less said the same.

With the recent green-lighting of Pfizer’s coronavirus vaccine and Moderna potentially receiving the same approval later this week, the public’s hesitancy in getting inoculated has been trending downward for weeks.

Earlier this month, a Gallup poll showed that 63 percent of respondents were willing to get vaccinated, representing a thirteen-percentage point jump from the 50 percent low that was registered in September.

Those results were in line with another recent survey carried out by the Pew Research Center, which found that 60 percent of Americans were planning on getting inoculated—up from 51 percent in September.

The poll further revealed that 39 percent of respondents definitely or probably would not get a coronavirus vaccine. However, about half in that group—roughly 18 percent of U.S. adults—admitted that it is possible that they would decide to get inoculated once others get vaccinated first and more information becomes available.