Pompeo Slams WHO For Failing to Include Taiwan In Coronavirus Conference 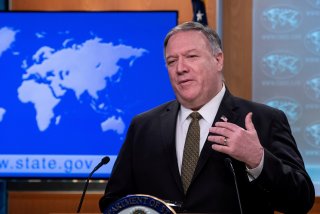 U.S. Secretary of State Mike Pompeo condemned the World Health Organization’s refusal to include Taiwan at its coronavirus conference this week.

Pompeo’s statement followed the beginning of the World Health Assembly meeting on Monday, which focused on the ongoing coronavirus pandemic. The U.S. Senate had voted last week to push the World Health Organization (WHO) to include Taiwan in its meeting as tensions between the United States and China ratcheted up.

“No one disputes that Taiwan has mounted one of the world’s most successful efforts to contain the pandemic to date, despite its close proximity to the original outbreak in Wuhan, China,” Pompeo claimed. “Transparent, vibrant, and innovative democracies like Taiwan always respond faster and more effectively to pandemics than do authoritarian regimes.”

He stated that “we need multilateral institutions to deliver on their stated missions and to serve the interests of all member states, not to play politics while lives are at stake.”

The Chinese government in Beijing considers Taiwan—an island that has been self-governing since the end of the Chinese Civil War in 1950—to be a renegade province of China that has no right to separate diplomatic ties with the world.

Taiwanese authorities had been allowed to participate in the WHO under the name “Chinese Taipei” from 2009 to 2017, but the WHO claimed that it has “no mandate” to invite Taiwan to its assembly, as it is not recognized as a state by the United Nations.

The Senate had asked Pompeo “to develop a strategy to regain observer status for Taiwan in the World Health Organization” in a unanimous vote last week.

American and Taiwanese critics have accused the WHO of ignoring warnings from Taiwan about the coronavirus in deference to Chinese sensitivities, and Pompeo called the organization’s decision to exclude Taiwan from Monday’s meeting a “spiteful action to silence Taiwan” by China.

He also referred to “the difference between China and Taiwan” in his statement, calling Taiwan a “model world citizen.”

The United States officially acknowledged the Chinese position that “there is but one China and Taiwan is part of China” as part of a 1979 joint communique with Beijing and ended official relations with Taiwan. But the U.S. government maintains strong unofficial ties with the Taiwanese government and opposes any attempt to reunify the island with China by force.

The clash over Taiwan’s participation at the World Health Assembly comes as part of a larger U.S.-China conflict over the coronavirus pandemic.

The same day, a newspaper published by China’s ruling Communist Party threatened several U.S. lawmakers with economic sanctions for attempting to hold the Chinese government financially liable for the pandemic.

Pompeo has implied that the novel coronavirus was the result of a lab accident covered up by the Chinese government—and blamed the WHO for abetting the coverup.

He told Focus on the Family on May 11 that “the Chinese Communist Party tried to suppress information about this virus, about where it began, about how it started, about how it was being transmitted from human to human, indeed employed the World Health Organization to further that storyline.”

“Taiwan is who identified that this virus was jumping human to human, and that there was a problem with a possible pandemic. We should have Taiwan [at the WHO],” Sen. Marsha Blackburn (R–Tenn.) said in a recent interview with the National Interest. “You're going to see a difference in the way people choose to work with China.”

This article initially stated that the United States recognized that “there is but one China and Taiwan is a part of China” in 1979. The communique of 1979 simply acknowledged that this is a Chinese position. This article has been updated to reflect the correct facts about the communique.