Remdesivir, Explained: A Coronavirus Wonder Weapon or Too Soon to Tell? 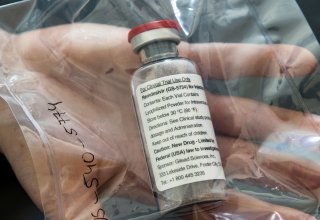 After weeks of high-level arguments about hydroxychloroquine, the potential coronavirus  treatment of the day is remdesivir. It's an antiviral drug, from Gilead Sciences, that was first developed to combat the Ebola and Marbug viruses.

The drug has been in clinical trials as a potential coronavirus treatment since January, and a report Thursday seemed to indicate that at least one hospital holding such a trial is showing encouraging signs.

The news, however, is far from the equivalent of a completed clinical trial, and everyone from financial analysts to the hospital hosting the study has cautioned that it's too early for unchecked optimism.

A report Thursday by Stat News stated that at a Chicago hospital where remdesivir is being tested in a clinical trial, "rapid recoveries in fever and respiratory symptoms, with nearly all patients discharged in less than a week." That specific study did not have a control group, and studies of the drug's effectiveness are in progress in many other places-more than 150 around the world, CNN said.

Dr. Kathleen Mullane,  the University of Chicago specialist supervising the study, said that most of the patients in the study had been discharged, and that only two had passed away. The comments came in a video discussion that had been obtained by the Stat News website. Mullane confirmed to Stat News that the video was genuine, but did not comment further.

The Stat News story acknowledges that the results provide "only a snapshot of remdesivir’s effectiveness." The study consisted of 125 people, 113 of whom had "severe disease."

"Partial data from an ongoing clinical trial is by definition incomplete and should never be used to draw conclusions about the safety or efficacy of a potential treatment that is under investigation," the University of Chicago said in a statement to CNN. "In this case, information from an internal forum for research colleagues concerning work in progress was released without authorization. Drawing any conclusions at this point is premature and scientifically unsound."

"This clinical trial experience appears to represent another encouraging, albeit largely anecdotal, data point for this high-profile drug candidate," JPMorgan's biotechnology equity analysts said in a note, per CNBC.