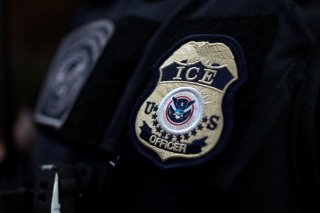 It’s a cliche to say that this is a movie that the government doesn’t want you to see. But in the case of “Immigration Nation,” that’s actually true.

The documentary, which debuted on Netflix Monday, features unprecedented access to agents of Immigration and Customs Enforcement (ICE) during the first three years of the Trump Administration, was met with resistance from that very administration. According to The New York Times, federal officials leaned on the filmmakers to delete footage, and sought to prevent the film from being released until after the presidential election.

It’s part of a pattern from an administration which this year while claiming to oppose censorship and “cancel culture,” has repeatedly sought to block the release of books and movies. However, as in the case of the memoirs of former National Security Advisor John Bolton and the president’s niece Mary Trump, the attempts by the government and/or the president to block the release of “Immigration Nation” were unsuccessful.

With the series on Netflix now, viewers will be treated to an illuminating, harrowing and absolutely infuriating look at ICE’s behavior in the Trump era.

Directed by the filmmaking team of Christina Clusiau and Shaul Schwarz, “Immigration Nation” consists of six episodes, lasting about one hour each, and all of the episodes are available now (I’ve seen the first four.) The series has been near the top of Netflix’s U.S. top ten list for most of the time it’s been available, demonstrating that there’s an audience for a completely different kind of true crime documentary filmmaking - one with significant real-world policy implications.

The film spends most of its time following the ICE agents day to day, in New York, Florida, North Carolina and Texas. We get up-close access to the ICE agents, to the immigrants often being pursued by them, as well as a few politicians and activists. There’s also some footage of President Donald Trump talking about the immigration issue, and news coverage of key moments in the travel ban and family separation sagas, as well as some turf wars between ICE and local politicians.

The ICE personnel we see range from those who are conflicted about the sorts of things they’re asked to do, to those who resemble the ugliest caricature of overzealous law enforcement. There are also many, many variations on “I was only following orders.”

“To be called a Nazi, you know, a racist, you know, it's just ignorant. It's ignorant,” one agent says, in the first episode. ”We don't pick and choose groups of people based on race, color, religion. We just look for people who are removable.”

"The government didn't hire me for my moral views,” another says. We see many occasions of ICE agents, say, hauling people in because of a need to meet arrest quotas.

One reason “Immigration Nation” is so valuable is because for many people, immigration policy is an abstraction, one associated with political ideologies and the oft-stated goals of the two parties. It’s not the media coverage of the 2017 travel ban and 2018 that we’ve seen such an up-close look at what’s happening on the front lines of immigration in America.