Rifles and Scalpels: How Effective Is Using the Military to Fight Coronavirus? 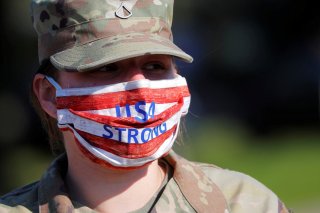 Now that we are in the fourth month of the coronavirus (COVID-19) global pandemic we can start to assess the efficacy of state-led strategies for fighting the spread of the virus. While the virus itself is more or less the same, geography and politics shape the context within which the virus spreads. Decisions taken or not taken are having an effect that have significant implications. In a bid to stem the rise in coronavirus infections, some countries around the world have chosen to deploy their militaries to the streets to enforce lockdowns and curfews.

While these measures may be effective in helping suppress the spread of the virus in the short-term—”flattening the curve” of infections and preventing health systems from being overwhelmed—these deployments carry risks through opening up troops to increased vectors for infection by mixing with the general public and putting countries at risk of aggression from enemies and non-state actors. Even if preventative steps are taken, they are not perfect and soldiers—grunts and commanders alike—are bound to be infected.

So far at least Lebanon, Jordan, Israel, Hungary, Malaysia, Peru, El Salvador, Chile, Ecuador, Oman, and the hard-hit countries of Spain and Italy have sent soldiers out into the streets, primarily in urban centers, to ensure individuals stay in their homes and to prevent unnecessary movements within and between cities. Other countries have tapped their militaries to assist with logistics such as driving oxygen trucks (UK) or building field hospitals (France).

For all countries with significant COVID-19 outbreaks, infections and preventative measures will affect militaries primarily along two axes: readiness and chains of command. Readiness will be affected through infections or quarantining of troops which takes troops or units out of operational rotation, a cascading trend that will render whole units—platoons to battalions—at reduced readiness for an extended period. Soldiers live and work in close quarters, meaning there is a higher chance for the virus to spread rapidly.

This is especially the case for navies whose crews are living and working in some of the most cramped quarters possible, making the following official guidelines for fourteen-day quarantines and social distancing practically impossible. For example, nearly half of the crew of the USS Cornado were quarantined while the aircraft carrier USS Theodore Roosevelt had to be fully evacuated, rendering both vessels combat-impotent. Rapid outbreaks like these could portend a reduced ability to project power for the entire U.S. Navy—and others that delay—until a vaccine for the virus is available.

The spread of the virus will also have a destabilizing effect on militaries as it takes out links in the chains of command as commanders, generals on down, become incapacitated and in some cases die. This, in turn leads, to confusion and indecision at the lower levels with a hodgepodge of measures taken to deal with the pandemic, further exacerbating the loss of readiness and operational capability.

For example, Iran’s army took a hit with the massive outbreak in the country with at least one Iranian general confirmed dead from the virus, while several high-ranking Egyptian officers also died after being infected. Elsewhere, the army chiefs of staff in Poland and Italy have tested positive while several Israeli officers, including a general are currently under quarantine. In militaries lacking robust backup systems of command, the temporary loss of an effective command structure creates a partial paralysis for a military as a whole.

The rapid global spread of the Coronavirus is also affecting inter-state military cooperation, weakening alliance structures which bolster national defenses. The cancellation of military exercises and slowdown of troop rotations will have an outsized effect on smaller or/and weaker states like Iraq that rely on international partners for training and force augmentation. In the past week, several Coalition partners such as France, Denmark, and the UK and others have pulled their forces out of Iraq due to its Coronavirus epidemic.

In a move that will have repercussions for states across the globe, the American Department of Defense ordered a stop to all troop movement overseas for sixty days, constricting the country’s ability to rotate and rapidly deploy forces should a crisis unfold. While these decisions will not affect the long-term viability of military alliances between Western countries and their smaller allies, they do create a temporary vulnerability most acutely through an enhanced feeling of uncertainty.

One upside of the outbreak of the Coronavirus across the globe is that at least in the short term, there has been a halt to nearly all major military offensives in war zones with unilateral ceasefires declared in southern Thailand, Yemen, and the Philippines on account of the COVID-19 pandemic. Conversely, the drawdowns in readiness and general distraction of militaries are being exploited by rival entities seizing on the opportunity to carry out attacks or at least probe for weak points.

Non-state actors have particularly taken this advantage as we saw Houthis firing missiles and drones at Saudi Arabia and Hezbollah launching a spy drone into Israel—targets countries which have implemented severe COVID-19 lockdowns. Demonstrating its menacing outlook towards global events, the Islamic State directed its followers to take advantage of the weakened and divided state of its enemies and carry out further attacks.

The spread of the Coronavirus may also, paradoxically, prompt some states to carry out or direct attacks as a way to demonstrate strength in the face of a crippling epidemic. This was likely the case when Iran directed the previously unheard of Iraqi Shi’a militia, Usbat al-Thairen to carry out rocket attacks against the U.S. embassy and American military bases in the country several weeks ago.

There is also speculation that the dawning realization of the gravity of their respective Coronavirus outbreaks are motivations for Russia sending an abnormally large fleet into the Pacific and increased Chinese naval sorties into disputed territory in the South China Sea. Certainly, there are a whole host of other factors behind these military maneuvering but the timing is undoubtedly influenced by weakness and temporary impotence of states across the globe.

These concerns create a whole new set of headaches for military commanders and politicians struggling to deal with the Coronavirus crisis. Militaries can be useful in solving problems in the civilian sphere—enforcing curfews and augmenting logistics for the Coronavirus being some of the best examples—but this needs to be balanced against a military’s prime directive to protect a country’s borders and interests. In order to best do this, countries can seek to preserve their military forces through large-scale testing and rapid quarantining, although most countries are still working to scale up their testing capabilities meaning infections amongst asymptomatic soldiers can still go undetected. Commanders can also listen to the concerns of their lower-ranking officers in order to head off larger infections and keep morale high—the recent firing and open criticism of the captain of the USS Theodore Roosevelt being an example of how not to act. Finally, politicians can balance the need for public safety against the public order and infection concerns of deploying militaries to their streets.