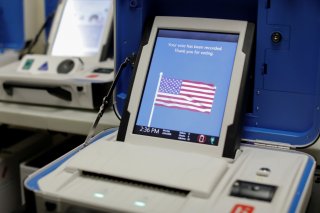 Ever since Election Day, lawyers and media allies of President Donald Trump—and sometimes the president himself—have frequently pushed conspiracy theories involving the voting machine company Dominion Voting Systems, as well as a different firm in the voting space, Smartmatic. The conspiracy theories have alleged everything from Dominion having switched votes from one candidate to another, to fantastical ideas about the ownership of Dominion and Smartmatic.

Different theories have posited that one or the other voting companies is owned or controlled by billionaire George Soros, the government of Venezuela, that country’s deceased dictator Hugo Chavez, and relatives of Speaker Nancy Pelosi, Senator Dianne Feinstein, or even President-elect Joseph Biden. Another assertion was that the votes in the election had been counted in Germany and that the U.S. Army at some point had staged a raid of the facility where the servers were located.

There has been, perhaps needless to say, not a shred of evidence produced, whether in the media or in a court of law, that Dominion or Smartmatic did anything untoward in the election, or that either of the companies is secretly owned by who the conspirators say they are. That supposed Army raid never happened either.

This has put the companies in a difficult position. They have both continually denied that they have done what they have accused of, but a large percentage of the country now believes that they can’t be trusted to conduct free and fair elections. This could have a very real effect on Dominion and Smartmatic’s bottom line if large swathes of the country don’t trust the integrity of their machines and software. Rep. Matthew Maddock, a Republican from Michigan, even tweeted earlier this month that “tomorrow I’ll be submitting a bill to remove every #Dominion machine in the state with instructions to put them in a dumpster and to light the dumpster on fire so we don’t use them in future elections,” although it doesn’t appear that he actually did.

The voting machine companies, therefore, have been pursuing legal action. The New York Times reported this week that Smartmatic had retained J. Erik Connolly, an attorney best known for the “pink slime” lawsuits of a decade ago, and that the lawyer had sent “scathing letters” to media companies, including Fox News, Newsmax and One America News Network, encouraging them to retain documents, which often comes in prelude to a lawsuit.

This led to the strange sight, last week of Fox News, Fox Business, and Newsmax all airing bizarre segments in which an expert went through the stated voting machine conspiracy theories and refuted all of them. These segments appeared on the Fox shows hosted by Lou Dobbs, Jeanine Pirro, and Maria Bartiromo, all of whom spent several weeks pushing the very theories that their network has now disavowed, likely in reaction to the threat of legal action.

The Times story said Dominion had hired a notable libel lawyer of their own, Tom Clare, and now, such a suit may be coming soon, from Clare’s firm on behalf of Dominion. Not against a media outlet, but against the president’s own lawyers.

CNN reported Wednesday that lawyers for Dominion have sent letters to both the president’s personal attorney, former Mayor Rudy Giuliani, and the White House counsel, Pat Cipollone, also asking them to “preserve all records related to the company,” while also warning that legal action against them is “imminent.”

The lawyers were warned, per CNN, to cease making “defamatory claims against Dominion” while letting them know there was “no confusion about your obligation to preserve and retain all documents relating to Dominion and your smear campaign against the company.”

Staffers had already been told, by the campaign, to preserve all documents related to Dominion, CNN said.

Giuliani, among other claims, has said that Dominion “was a front for Smartmatic”—the two companies are not connected with each other—while he and other Trump lawyers have made claims of things the company has done in states where they are not active. Smartmatic, in fact, played no role in the U.S. election in 2020, with the exception of Los Angeles.

It’s not the only potential legal trouble that Giuliani is facing. NBC News reported this week that prosecutors in the Southern District of New York—where Giuliani served as U.S. attorney in the 1980s—have a “very active” investigation into the former mayor and that they have sought email communications from him. The investigations appear to center on Giuliani’s work in Ukraine.

The Times story also said that the Newsmax/OANN strategy to basing programming on conspiracy theories that accuse specific people of specific bad deeds, despite having successful ratings since the election, has a major downside, namely the possibility of legal action. This could affect possible plans for a post-presidency launch of a media outlet by Trump himself.

There was also a pro-Democratic version of this earlier this month when the liberal political website Raw Story amplified an equally baseless contention that the margins of Senate Majority Leader Mitch McConnell’s easy re-election in Kentucky “don’t add up.” This was due to some supposed nefariousness involving the voting machine company Election Systems & Software, which was just as lacking in evidence as the pro-Trump conspiracies were. There were also similar accusations, in the Bush era, about voting machines used in the 2004 election.