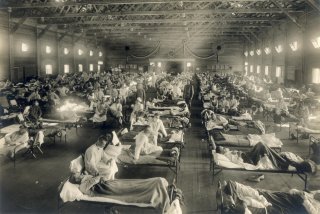 The 1918 influenza pandemic ravaged the globe in a trio of waves, killing an estimated fifty million people—with about 675,000 from the United States—and infected roughly 500 million, or one-third of the world’s entire population.

While the first outbreak in March of 1918 was relatively mild, the second wave—similar to the coronavirus—was far deadlier, coining the influenza as “among the most devastating pandemics in human history.”

The global pandemic lasted for nearly two years, with its peak in deaths in the fall of 1918, as temperatures grew colder and contained less-humid air, enabling virus-infected particles to last longer. At the time, people spent more time indoors to avoid the winter-like weather in areas that often didn’t have proper ventilation and airflow, making it easier for the virus to spread. Historians, however, attribute the “fatal severity” of the flu primarily to a “mutated virus spread by wartime troop movements” during War War I.

Fast-forward nearly a century later, and the globe is experiencing a similar pandemic—especially in the United States—as more people congregate indoors to steer clear of freezing temperatures. The coronavirus has entered a rife second outbreak, pushing the reported U.S. case count to almost 12 million, with more than 252,000 deaths and roughly 55.6 million infections worldwide.

The 1918 influenza didn’t see infections subside until the summer of 1919 after a third wave drowned the United States following the end of World War I when Americans and soldiers gathered to celebrate the war’s end.

Although the origin of the influenza pandemic remains unknown, one of the first outbreaks flooded Camp Funston in Fort Riley, Kansas in March 1918 when more than one hundred soldiers felt flu-like symptoms including a high fever and malaise. Within a week, the number of cases nearly quintupled. The virus spread rapidly through the Amy installation, where 54,000 troops resided, hospitalizing two percent of them, with thirty-eight deaths—most of which contracted pneumonia.

Labeled the “Spanish flu”—due to Spain’s widespread reporting of the sickness when other countries neglected to cover it—cases diminished over the summer of 1918, brewing hope that the flu had come to rest. But once September hit, troop movement and crowded military camps during the war effort expedited the spread of the infection throughout Europe and the rest of the world. When the infection made its way overseas, a mutated form of the flu developed—one that was much deadlier than the seasonal flu.

The new strain of the Spanish flu likely triggered the second fatal wave, as it has the “power to kill” particularly young and healthy men and women within a day of presenting symptoms.

“The rapid movement of soldiers around the globe was a major spreader of the disease,” James Harris, a historian at Ohio State University, familiar with infectious diseases and World War I, told HISTORY. “The entire military-industrial complex of moving lots of men and material in crowded conditions was certainly a huge contributing factor in the ways the pandemic spread.”

What Happened During the Second Wave

From September to November 1918, the mortality rate from the Spanish flu soared, with 195,000 Americans dying from the infection in October alone. Between 20 to 40 percent of the U.S. Army and U.S. Navy personnel grew infected, “interfering with induction, training and efficacy.”

"Influenza and pneumonia killed more American soldiers and sailors during the war than did enemy weapons," a 2010 study about the pandemic wrote.

A massive outbreak occurred at Camp Devens, a U.S. Army training camp near Boston, where infections multiplied to 6,674 cases in less than a week.

The second wave wiped out healthy people between the ages of twenty-five to thirty-five, as the newly mutated form of the disease caused seething fevers, nasal hemorrhaging and pneumonia. Some patients even drowned in their lungs packed with infectious fluid.

Major cities across the country were smacked hard by the pandemic, as Philadelphia’s cold-storage plants had to be used as temporary morgues to store hundreds of corpses, Chicago, along with other areas, posed restrictions on movie theaters, restaurants and banned public gatherings and San Francisco urged its residents to wear masks when in public.

While there were some forceful mask-wearing and social-distancing laws to contain the flu’s spread in the United States, scientists pin the blame on public health officials at the time who prioritized the ongoing war effort over combatting the deadly infection. Spain was the only country to report the severity and real data of the flu, as other countries ignored the risks.

From December 1918 until the summer, the Spanish flu continued to plunder through the globe, adding to the total case and death count.

The coronavirus pandemic is much different than the Spanish flu outbreak.

First, there have been hundreds of scientific advancements and technological improvements in public health and medicine, allowing scientists to examine cells and viruses through a microscopic lens. A microscope couldn’t see tiny infectious cells until more than a decade after the 1918 influenza pandemic.

There also wasn’t a vaccine.

In just nine months into the current public health crisis, two vaccine candidates are more than 94 percent effective in preventing infections and have caused no serious safety concerns. As of Friday, Pfizer and BioNTech announced they will submit an emergency use authorization to the U.S. Food and Drug Administration for their vaccine candidate.

The Centers for Disease Control and Prevention also noted that there was an extreme shortage of professional nurses, as most of them were deployed to military camps across the country and abroad. It didn’t help that the American Red Cross rejected the proposal of training Black nurses to help fight the pandemic during its worst time.

Overall, there was a general lack of knowledge about the Spanish Flu, as scientists didn’t have the proper resources to fully understand the scope of the infection.

Although the country is amid a second, deadly wave of the coronavirus, two vaccine candidates are wildly effective in such a short amount of time—a scientific advancement that did not come until years after the Spanish flu ran its course through the globe.