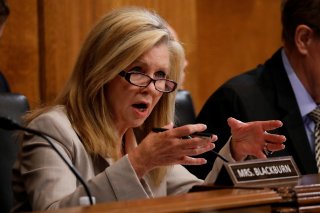 It’s not every day that a nuclear-armed communist state denounces an American by name.

But that’s what happened to Sen. Marsha Blackburn (R–Tenn.) last week, when the Global Times—the English-language edition of the Chinese Communist Party newspaper People’s Daily—ran an article slamming U.S. lawmakers and officials over their attempts to hold China liable for the 2019 coronavirus disease (COVID-19) pandemic.

The article announced that four unnamed lawmakers and two “entities” in the United States would be subjected to “painful” economic sanctions. And it criticized by name the sponsors of the Stop China-Originated Viral Infectious Diseases (Stop COVID) Act, which would open the door to lawsuits against the Chinese government “for creating and worsening this worldwide pandemic.”

The National Interest spoke to Blackburn about her sponsorship of the Stop COVID Act, the future of U.S.-China relations, and her plans for pandemic preparedness. Below is a transcript of the conversation, lightly edited for clarity.

Thank you for your time, Senator.

I'm delighted to spend a couple of minutes with you, thank you.

Of course. The reason we're talking today is that the Chinese Communist Party newspaper Global Times threatened you with sanctions for a bill you're proposing. The Stop COVID Act would allow Americans to sue China for the coronavirus pandemic.

Would you be able to walk our readers through what you believe China needs to be held accountable for?

Of course. We're discussing the Foreign Sovereign Immunities Act. What we know is that China feels like they should be able to get by and not be held accountable for hiding information, not being transparent, lying to the world, and because of this, Americans have lost lives. They have lost livelihoods.

We know that some of our steps need to be to give them access through U.S. courts to sue the Chinese Communist Party. This has been used by 9/11 families. It was used by families following the Beirut bombings.

For COVID-19, which is a biological agent, which is covered in this act, we feel it is appropropriate.

I do believe that there is bipartisan consensus that the Chinese government very much hindered the response to the early outbreak. It's one thing to say that China should be held accountable, of course, and it's another to actually make them pay.

I assume we can't just mail an invoice to the Politburo in Beijing and expect them to pay up. I'm curious what measures you think we could take to enforce a judgement under this act.

But the important thing, Matt, is that you have to get the ball rolling.

The way to get the ball rolling was to file the Stop COVID Act. Senator [Martha] McSally [R–Az.], Senator [Steve] Daines [R–Mont.], Rep. [Lance] Gooden [R–Texas], we decided to go ahead and start this process, because you're exactly right, it's not going to be timely.

We're dealing with a government that—it's the Communist Party. They had three thousand cases before they said anything. They were locking people in their homes, allowing them to die. They let it grow from an outbreak to an epidemic to a pandemic.

President Xi knew! He knew for six days and said nothing.

Still they have not allowed the World Health Organization or the CDC [U.S. Centers for Disease Control and Prevention] into the Wuhan Institute of Virology. They won't let them in to see what it is that did happen.

We know what we're dealing with there.

The Chinese Communist Party is what it is, and I think we've seen that with them threatening American lawmakers over a domestic law. I'm wondering what response you think we should have to things like the Global TImes, where they try to retaliate against us for things like the foreign sovereign immunities changes.

Right. You know, I think one of the things we have to remember is that China wants to be considered a global leader. Domination is their goal.

They want to be considered a global economy, and they're looking at a situation now where, you know what, basically everybody is saying, "we know China did this. It came from Wuhan, China." There is agreement on that fact. That is not something that is disputed.

We have allies across the globe that are saying that China needs to pay for this, because they knew they had it, and look at their actions.

If you were from Wuhan, you could not travel around China, and you could get on a plane in Wuhan and travel anywhere else that you could fly. But you just could not go around China. So they knew what they had. And they knew it was contagious.

They knew that they were stockpiling PPE [personal protective equipment] for 51 days while they were keeping their mouth shut, and then they ran the price up on people around the globe when they called and tried to buy it.

This also leads us to what we're working on with supply chains: my SAM-C [Securing America’s Medicine Cabinet] legislation, others that are working on supply chain items for medical devices, for PPE, for technology, for electronics.

Another thing I wanted to ask about changing foreign sovereign immunities is—you know, it could create a precedent that other, more malign actors might jump on. And even if it's not justified, I don't think it's out of the question that people in Iraq or Vietnam might try to sue us with the encouragement of their governments.

Are you worried that other countries would seize on this, or do you think that China is so in the wrong here that it wouldn't create a broader precedent?

Again, in that accountability—our reviewing what China holds in our debt, making certain that we look at what may be possible to have them waive that debt. They hold a trillion dollars worth of our debt. So we recognize that.

We also will look at how China works with other organizations like the World Health Organization, the WTO [World Trade Organization], the UN, and review their participation there.

I think it was right that we stepped forward to withhold funding from the WHO. We've also encouraged the WHO, for their global assembly, that is, this month, to include Taiwan.

Taiwan is who identified that this virus was jumping human to human, and that there was a problem with a possible pandemic. We should have Taiwan there. You're going to see a difference in the way people choose to work with China.

We also know that it leads us to that manufacturing concept as we look at recovery for our country. How are we going to return some of this critical infrastructure, manufacturing, things that affect our national security and our national stockpiles, and return that to U.S. shores?

That's actually something I've heard from both sides of the aisle as well, that we need to be more prepared for pandemics in the future.

I did want to ask about your thoughts on pandemic preparedness, because you supported increasing funding for the Pandemic and All Hazards Prevention Act in 2017, but you also voted for HR 1217 in 2011 and cosponsored HR 1099 in 2013 to eliminate the CDC's Prevention and Public Health Fund, which many of your colleagues criticized as a "slush fund," but was also twelve percent of the CDC's pre-pandemic budget.

I'm curious whether this pandemic has affected the way you think about public health and government spending.

As we have worked with NIH [National Institutes of Health] and FDA [Food and Drug Administration] and CDC, what we have found is that sometimes the bureaucracy gets in its way in trying to make decisions.

And as we have seen with the issue of testing, and the slowness of CDC to respond, FDA stepping up and saying, "you know what, we've got rules and regulations that get in our way," so what have they done?

These are things that people who are trying to solve this problem will talk about, and what we want is an agile, flexible, responsible federal infrastructure.

We don't want one that is slow to assess, slow to respond, and I think post-COVID you're doing to see them become more resourceful, and you're going to see them respond in a more efficient manner.