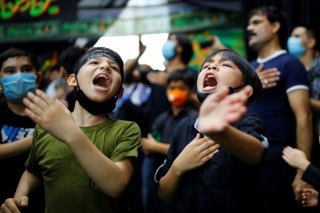 New research out of the University of California, Davis, has revealed that speaking softly has the potential to limit the spread of the coronavirus in high-risk, poorly ventilated indoor spaces.

A reduction of six decibels in average speech levels was shown to have a similar effect on cutting the transmission risk of the virus as increasing a room’s ventilation level twofold, the researchers noted.

“The results suggest public health authorities should consider implementing ‘quiet zones’ in high-risk indoor environments, such as hospital waiting rooms or dining facilities,” the researchers stated in an advance copy of a paper detailing the study.

The difference between whispering and shouting is roughly thirty-five decibels—and at the higher levels, particle emission rates were boosted fiftyfold.

Normal, everyday conversation is in the ten-decibel range, while a restaurant’s ambient noise can reach seventy.

“A crowded but quiet classroom is much less dangerous than an uncrowded karaoke bar where patrons are socially distanced but talking and singing over loud music.”

There already have been several reports of choir practices that became superspreading events that infected dozens of people at a time.

For the study, the researchers were able to examine microscopic droplets ejected while an individual talked, and those droplets quickly evaporated to leave behind aerosol particles that were still large enough to transport the contagion.

These findings come after the World Health Organization now appearing to be on board with many other medical experts across the world in saying that the airborne spread of the coronavirus is, in fact, possible.

At the beginning of the coronavirus outbreak, both the WHO and the U.S. Centers for Disease Control and Prevention often asserted that individuals need to worry about only two types of transmission: inhaling respiratory droplets from an infected person nearby and touching a contaminated surface and then your eyes, nose, or mouth.

Now more than eight months into the pandemic, there are roughly 28.2 million confirmed cases of coronavirus worldwide, including at least 910,000 related deaths, according to the latest data from Johns Hopkins University.

Ethen Kim Lieser is a Minneapolis-based Science and Tech Editor who has held posts at Google, The Korea Herald, Lincoln Journal Star, AsianWeek and Arirang TV.