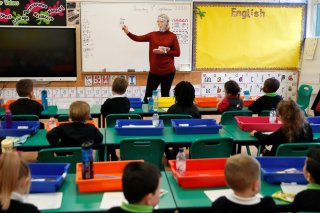 A new British study has revealed that the reopening of schools across the United Kingdom last spring and early summer did not pose major coronavirus transmission risks.

The research, funded by Public Health England and published in the journal The Lancet Infectious Diseases, found virus transmissions to be “uncommon” at all education levels. Although there were several small outbreaks, they mostly involved teachers or staffers who brought the contagion onto school grounds from the outside community.

“SARS-CoV-2 infections and outbreaks were uncommon in educational settings during the summer half-term in England,” the study’s authors wrote.

“The strong association with regional COVID-19 incidence emphasizes the importance of controlling community transmission to protect educational settings. Interventions should focus on reducing transmission in and among staff.”

For the study, the researchers analyzed coronavirus infection rates and outbreaks between June 1 and July 17, the period when students at some schools returned for a final session before starting the summer break.

During that month and a half, the data pointed to about 1.6 million students attending 38,000 childcare centers, 15,600 primary schools, and four thousand secondary schools, in addition to the presence of 593,000 teachers and staffers. There are roughly nine million total students in England.

What the researchers eventually discovered was that the schools recorded a total of 343 coronavirus-positive cases, including 113 individual cases, nine “coprimary” cases, which generally involved two siblings within the same family, and fifty-five outbreaks.

Among the infected children, none required hospitalization. However, three staffers contracted the virus and one died “probably acquiring the infection from a household member with confirmed COVID-19 who had acquired the infection in the community,” the study stated.

Moreover, the majority of the outbreaks involved school staffers spreading the virus to other staff members or to children, rather than the students transmitting the contagion to adults. The average outbreak was also found to involve only two cases.

As for the students, the researchers concluded that “children mainly acquired SARS-CoV-2 infection at home and most were asymptomatic.”

“Reassuringly, we found very little transmission between students, which is consistent with emerging literature for young children,” they added.

“Reassuringly, too, there were very few transmission events between staff and children, especially given the difficulties in maintaining physical distancing with younger children.”