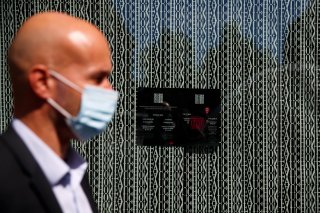 A new study has revealed that nearly a quarter of the U.S. population is currently experiencing symptoms related to depression—that’s roughly three times the number before the ongoing global coronavirus pandemic began.

Medical experts are in agreement that when a population experiences something highly traumatic, such as natural disasters or terrorist attacks, mental-illness cases are expected to climb in the weeks and months following the event.

But the coronavirus pandemic seems to be on an entirely different level, according to Catherine Ettman, a doctoral student in public health at Brown University and lead author of the study, which was published in the American Medical Association journal JAMA Network Open.

“We were surprised at the high levels of depression,” she told National Public Radio.

“These rates were higher than what we’ve seen in the general population after other large-scale traumas like September 11, Hurricane Katrina, and the Hong Kong unrest.”

In nationwide surveys conducted before the pandemic, 9 percent of respondents reported depressive symptoms, the researchers found. Once the pandemic started, that percentage soared to 28 percent.

Ettman pointed out that there are a variety of factors that are likely driving the surge in levels of depression, which can include “fear and anxiety around COVID, as well as the dramatic economic consequences.”

Compared to 28 percent of the general population, 47 percent of people with a household income less than $20,000 and 41 percent with household savings under $5,000 reported symptoms of depression.

“People with lower income were twice as likely to have depression,” Ettman said.

“And among people within the same income group, (those) who had less in savings were one and a half times more likely to have depression.”

Given the disproportionate burden on individuals with less financial resources, Ettman noted that there is a greater need for livable wages, affordable housing, and health insurance.

Before the pandemic, many people with depression and anxiety weren’t receiving the necessary treatment in a health-care setting. According to the National Alliance on Mental Illness, fewer than a third of individuals who could benefit from mental-health care got the services they need.

Moreover, suicide rates in the United States were also trending higher before coronavirus—and medical experts are now concerned that the pandemic has the potential to increase those numbers.

In a commentary published along with a previous study that examined the links between financial strain and suicide rates, Ettman asserted that the current pandemic “presents a unique set of risk exposures to populations, which may lead to an increase in suicide.”

According to the latest data from Johns Hopkins University, there are more than 26.1 million confirmed cases of coronavirus worldwide, including at least 864,000 related deaths.