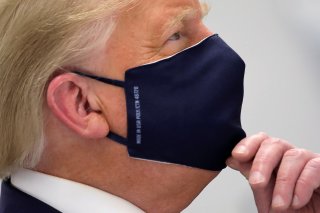 A widely shared video on Monday kicked off the latest round in social media companies’ often controversial efforts to stop the spread of coronavirus misinformation.

Per CNN’s account, the conservative website Breitbart News on Monday live-streamed video of an event featuring a group called “America’s Frontline Doctors,” held on the steps of the U.S. Supreme Court in Washington. At the event, the doctors shared a number of claims significantly at odds with the scientific consensus on coronavirus, including that masks are not necessary, and that the drug hydroxychloroquine—which the president said last month that he had been taking —is a “cure” for the disease.

While studies over the last few months have reached differing but mostly skeptical conclusions on the efficacy of hydroxychloroquine in the treatment of coronavirus, there is absolutely zero scientific basis for the assertion that the drug is a cure for the disease.

President Trump shared the video of the press conference, which was widely shared throughout the day on Monday, gaining as many as fourteen million views on Facebook alone on Monday. But by the end of the day, Facebook, Twitter and YouTube had all removed the video, labeling it false information.

“We’ve removed this video for sharing false information about cures and treatments for COVID-19,” Facebook told CNN, adding that it had begun “showing messages in News Feed to people who have reacted to, commented on or shared harmful COVID-19-related misinformation that we have removed, connecting them to myths debunked by the WHO.”

Other reporting has questioned the credentials of some of the doctors featured in the America’s Frontline Doctors video. Per The Daily Beast, one of the participants in the press conference, Stella Immanuel, has made claims in the past about “alien DNA and the physical effects of having sex with witches and demons in your dreams.”

Also on Monday, the president retweeted a tweet by commentator Melissa Tate, claiming that “6000 doctors surveyed across the world all said #Hydroxychloroquine works in Covid patients.” That is a significant mischaracterization of an online survey, taken in early April, in which a small minority of the 6,000 doctors surveyed claimed that the drug was the most effective treatment available at the time; they did not “all” say that it “works in Covid patients.” By the next week, it was no longer seen as the top option among doctors in the same survey.

And then, on Tuesday morning, the president’s son Donald Trump, Jr., was suspended from Twitter for twelve hours, for “violating the policy on spreading misleading and potentially harmful information related to COVID-19,” according to a tweet by Republican strategist and spokesman Andrew Surabian.

This followed the battle, a few weeks ago, over “Plandemic,” a documentary posted to YouTube that made various false claims about the pandemic and Dr. Anthony Fauci. This week, Sinclair Broadcast Group pulled a planned segment in which Judy Mikovits, the researcher featured in “Plandemic,” accused Dr. Fauci of having created the coronavirus himself.