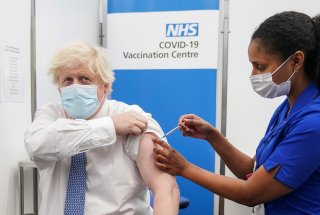 Ever since the Omicron variant first appeared around Thanksgiving, the U.S. government has been cautious but largely optimistic. While often caveating that we must remain vigilant and that much remains to be seen when it comes to data, most of the news so far has been good, on the U.S. side.

“When I look to what the future holds, so much of that is definitely about the science, but it’s also about coming together as a community to do things that prevent disease in yourself and one another,” CDC head Dr. Rochelle Walensky said an interview with the Associated Press. “And I think a lot of what our future holds depends on how we come together to do that.”

However, it’s a different story in the UK.

The UK Health Security Agency issued a risk assessment on Wednesday for the Omicron variant, giving scores of “Red,” the most serious status, for “growth advantage” and “immune evasion.” It gave the variant an “Amber” status for transmissibility. It reported “insufficient data” when it came to infection severity.

The agency predicted that Omicron was likely to overtake Delta and become the dominant variant in that country.

“The observed growth advantage may be due to immune evasion or transmissibility. It is most plausible that it is a combination of both,” according to the risk assessment. “The current growth rate implies either a substantial change in one parameter or at least moderate change in both (for example if transmissibility is similar to Delta, immune evasion must be substantial).”

The risk assessment also called increased transmissibility, compared to that of Delta as “biologically plausible.”

The population in the United States has been warned to expect one million cases by the end of December, according to CNBC.

“If the growth rate and doubling time continue at the rate we have seen in the last 2 weeks, we expect to see at least 50% of coronavirus (COVID-19) cases to be caused by Omicron variant in the next 2 to 4 weeks,” the UKHSA said in a press statement this week. The question of transmissibility, and whether it is worse than previous variants, continues to be studied by scientists in the UK.