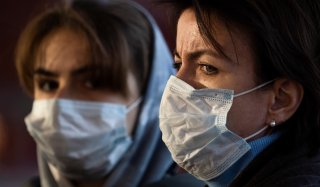 Coronavirus cases in the United States have plummeted to less than half of the ongoing pandemic’s most recent peak, according to the latest data compiled by Johns Hopkins University.

Furthermore, hospitalizations are also sinking across the nation. According to the Department of Health and Human Services, roughly fifty-two thousand Americans are currently hospitalized with the virus. In early September, that number was sitting at more than one hundred thousand.

The United States is still reporting about one thousand four hundred daily deaths from coronavirus, but that figure has been cut by one-third when compared to the peak of more than two thousand fatalities per day on September 22.

“Personally, I’m optimistic that this may be one of the last major surges, and the reason for that is because so many people have been vaccinated, and also because a lot of people have had COVID,” Dr. Arturo Casadevall, the chair of molecular microbiology and immunology at the Johns Hopkins Bloomberg School of Public Health, told CNBC.

“We now have a lot of immunity in the population,” he added.

Meanwhile, the global death toll from the novel virus surpassed the grim total of five million on Monday. The United States alone has registered more than seven hundred forty thousand lives lost—more than any other country.

“This is a defining moment in our lifetime,” Dr. Albert Ko, an infectious disease specialist at the Yale School of Public Health, told The Associated Press.

“What do we have to do to protect ourselves so we don’t get to another five million?” he continued.

The news outlet noted that “the death toll …  is about equal to the populations of Los Angeles and San Francisco combined. It rivals the number of people killed in battles among nations since 1950, according to estimates from the Peace Research Institute Oslo. Globally, COVID-19 is now the third-leading cause of death, after heart disease and stroke. The staggering figure is almost certainly an undercount because of limited testing and people dying at home without medical attention, especially in poor parts of the world, such as India.”

Despite the improving numbers in certain regions, experts still warn that the continued transmission of the virus means there is potential for new and deadlier variants to emerge.

“The final potential threat or thing that worries us all is the ability of COVID to change and mutate,” Dr. Barbara Taylor, an assistant dean and associate professor of infectious diseases at the University of Texas Health Science Center at San Antonio, told CNBC.

A new variant “could change everything about the pandemic over the next six months,” she warned.