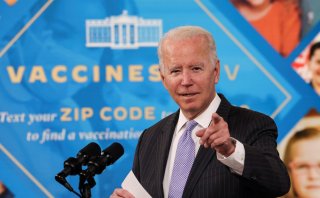 The United States has ordered half a million more monkeypox vaccine doses for delivery this year, marking a significant escalation in the battle against the fast-growing virus outbreak worldwide, according to a new Politico report.

The order, which comes as the vaccine is in short supply in many other countries, now brings the total number of U.S.-owned monkeypox doses from 1.4 million to 1.9 million. However, many of those doses are held by the manufacturer Bavarian Nordic until the federal government requests them.

“The 500,000 new doses will significantly grow U.S.-held stockpiles—which now likely holds around 70,000 doses,” the news outlet wrote. “The vaccine will be manufactured using bulk materials owned by the U.S. and stored with the drug maker.”

Health officials contend that monkeypox does not require mass vaccination but individuals with a high risk of exposure will likely need the shot.

“Smallpox and monkeypox vaccines are effective at protecting people against monkeypox when given before exposure to monkeypox,” the Centers for Disease Control and Prevention (CDC) wrote on its website.

“Experts also believe that vaccination after a monkeypox exposure may help prevent the disease or make it less severe,” it continued.

According to the health agency, more than 1,300 monkeypox cases have been reported worldwide, while the United States has seen at least forty-five cases across fifteen states and Washington, D.C. There have been no deaths reported so far.

The recent surge in monkeypox cases in North America and Europe is highly unusual since the virus is not endemic in these countries. Monkeypox is usually found in Central and West African rainforests where animals that carry the virus live.

“The risk of monkeypox becoming established in non-endemic countries is real,” he said during a press briefing. “But that scenario can be prevented. WHO urges the affected countries to make every effort to identify all cases and contacts to control this outbreak and prevent onward monkeypox spread.”

WHO officials have stressed that the virus itself is not a sexually transmitted infection, but the recent outbreak appears to have been spread among men who have sex with other men. Officials also emphasized that anyone—regardless of sexual orientation—can contract the disease.

On Friday, the CDC sounded the alarm that some people recently diagnosed with sexually transmitted diseases might also be carrying the monkeypox virus.

“It’s important to be aware that monkeypox cases may present similar to some sexually transmitted infections and could be mistaken for other diagnoses,” CDC director Rochelle Walensky told reporters. “Healthcare providers should not rule out monkeypox just because a patient has another diagnosis or another STI.”