Vaccines Appear Safe for Kids, and Other Omicron News 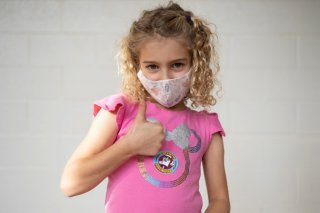 In the year since vaccines first arrived for the coronavirus, a major bit of controversy has involved the idea of children being vaccinated. Some parents, even many who are themselves vaccinated, are uneasy about allowing their children to receive the jab.

Now, as the Omicron variant continues to tear through the U.S. population, a new CDC report says vaccinations for children have very, very rarely been associated with negative outcomes.

According to an NBC New York report about the announcement, the analysis found only 100 “serious” reports, out of the 8.7 million doses administrated to children in the last two months, for a percentage of 0.0011%.

The report found a total of two deaths, both of whom had underlying conditions; CDC found no link between the shots and their deaths. There were only nine reports of hospitalization in children.

In other positive news about shots, a pair of reports Thursday showed that those who have received two shots of the Johnson & Johnson vaccine, the original shot, and the booster, are “well protected against severe disease and hospitalization from the Omicron variant of coronavirus,” CNN reported. One of the studies was from South Africa and showed that the vaccine was effective against the Omicron variant.

Also this week, an international group of scientists at the University of Washington announced that they have “identified antibodies that neutralize omicron and other SARS-CoV-2 variants.” This could lead to the development of new vaccines, the university said.

“This finding tells us that by focusing on antibodies that target these highly conserved sites on the spike protein, there is a way to overcome the virus’ continual evolution,” David Veesler, an investigator with the Howard Hughes Medical Institute and associate professor of biochemistry at the University of Washington School of Medicine in Seattle, said in the release.

Meanwhile, as Omicron spreads in the United States, large numbers of airline flights continue to be canceled. Per the Wall Street Journal, citing FlightAware, airlines canceled 1,300 flights in the United States as of late Thursday. Many of the cancellations were due to staffers and crew members affected by COVID-19.

The other big question, expected to arise next week, is what will happen with the nation’s schools. Most are scheduled to return from winter break after the new year, but the continuing Omicron wave has raised questions about whether that can go ahead, especially since there have been reports of more children being hospitalized than was the case during earlier phases of the pandemic.

Most schools in Texas will resume in-person instruction in January, the Texas Tribune said. In New York City, where Omicron is surging especially and child hospitalizations are rising as well, in-person school will resume next week. However, according to NBC New York, the city’s public schools will double their weekly PCR testing, while distributing tests to students when a classmate tests positive.

"This guarantees more consistency in their education. It guarantees fewer disruptions,” Mayor Bill de Blasio, who is in his final days in office, said at a press conference this week. “And it works because here's the fact we now know: 98% of close contacts don't turn into positive cases themselves," de Blasio said. "We have a lot of evidence now that tells us this is going to be the approach that works in the future.”

And finally, there is good news from South Africa, where the Omicron variant was first reported just over a month ago. A new preprint study, as published in Science Direct, found that South Africa may have passed its peak of cases- without any jump in hospitalization or death. The study only looks at one particular hospital system, and it is not yet peer-reviewed. But it offers promising news about the direction the variant could take.