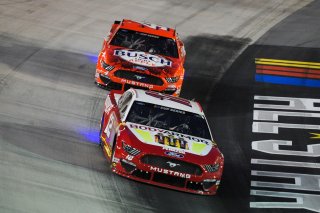 Nearly 20,000 fans attended the Bristol Motor Speedway in Tennessee on Wednesday, which was the largest in-person sporting event since the coronavirus struck the US four months ago.

Tennessee restricted the number of attendees due to social distance implementations, setting a cap at 30,000 tickets, but the venue can hold up to 140,000 fans.

“Tonight felt like an event again, and I felt like we’ve been missing that piece for a couple months,” Elliott told NBC News.

“It felt good to have NASCAR back. NASCAR is about the fans. I felt like the vibe was back,” he said.

Motor Speedway, which is privately owned, is not obligated to release the actual number of attendees, but according to NBC, the crowd was estimated to be between 25,000 to 30,000 people.

Tennessee is another state that’s seeing a spike in the number of confirmed cases - along with Florida, Texas and Arizona - as Republican Gov. Bill Lee announced reopening plans of businesses, restaurants and retail stores with nearly no restrictions. The state has almost 70,000 cases with less than 1,000 deaths as of Thursday.

“Tonight I’ll be wearing my mask at the @BMSUpdates as the nation turns to Tennessee to watch the @NASCAR #AllStarRace. I applaud Bristol for taking the necessary precautions to keep fans safe while also enjoying the return of live sports in Tennessee,” Lee tweeted Wednesday.

Sports leagues like the NBA and the MLB have announced season adjustments as the country faces the pandemic.