WHO Pleas for Aid in Containing Uganda Ebola Outbreak 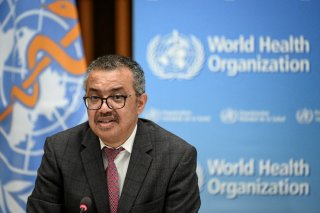 The World Health Organization (WHO) on Wednesday confirmed that it was working with Uganda to prevent the country’s Ebola outbreak from spreading to other nations, CNBC reported.

Health authorities in the East African nation, which declared the outbreak in late September, have identified seventy-four confirmed and probable cases of the disease. At least thirty-nine people have died from the virus, while fourteen have recovered. The country has experienced four previous Ebola outbreaks, with the deadliest one in 2000 leaving more than 200 people dead.

“Our primary focus now is to support the government in Uganda now to rapidly control and contain this outbreak, to stop it from spreading to neighboring districts and neighboring countries,” WHO director-general Tedros Adhanom Ghebreyesus said during a briefing in Geneva.

Dr. Mike Ryan, who leads the WHO’s health emergencies program, said on Wednesday that Uganda’s government needs more support from the international community to boost surveillance on the ground, noting that not enough health alerts are being issued at the local level.

Last week, the Biden administration put out a notice that any individual entering the United States who has been to Uganda within the past twenty-one days will be rerouted to one of five airports—New York, Newark, Atlanta, Chicago, or Washington—for “enhanced screening.”

According to a notification released by the U.S. Embassy in Uganda, the Department of Homeland Security’s Customs and Border Protection will conduct the screening, which will include a temperature check, risk assessment, visual symptom check, and contact information verification. Currently, there are no confirmed cases of Ebola in the United States, and “the risk of Ebola domestically is currently low,” the embassy said.

Ebola is a severe, often fatal illness usually causing fever, fatigue, and muscle pain at the start. Victims then suffer from vomiting, diarrhea, rash, and in some cases internal and external bleeding.

The virus boasts a high mortality rate of about 50 percent—with the percentage sometimes even hitting 90 percent in past outbreaks—but the disease is known to be relatively more difficult to transmit to others as it does not spread through airborne transmission. People catch the virus through direct contact with the bodily fluids of a person who has fallen ill or died from the disease. It can also spread through contact with contaminated materials and infected animals.