WHO Scientists in Wuhan Exit Quarantine for Coronavirus Origin Study 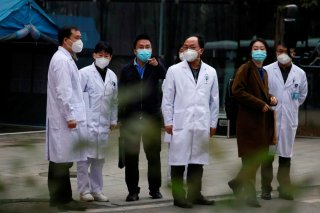 A team of scientists from the World Health Organization has emerged from quarantine in Wuhan, China—long considered by most experts to be the epicenter of the ongoing coronavirus pandemic—to start its fact-finding mission on the disease’s origin.

Before the researchers could engage in any scientific study there, they were required to isolate for fourteen days after arriving in the country.

The mission, however, has become a politically charged issue in China, which has strongly opposed any independent investigation that it could not control step by step.

WHO Director-General Tedros Adhanom Ghebreyesus has long expressed disappointment over the months-long delays in getting a team into the country, but a breakthrough was recently made with the Chinese government, which is open to the idea of the virus having originated in a different country.

In a recent press conference, Foreign Ministry spokesperson Zhao Lijian told reporters that the visit by WHO experts was an opportunity to “exchange views with Chinese scientists and medical experts on scientific cooperation on the tracing of the origin of the new coronavirus.”

He continued: “Along with continuous changes in the epidemic situation, our knowledge of the virus deepens, and more early cases are discovered,” adding that the search for the origin of the virus will likely involve “multiple countries and localities.”

Former WHO official Keiji Fukuda, who is not part of the Wuhan team, told the Associated Press that it may take years before any conclusions can be made about the contagion’s origin.

“This is now well over a year past when it all started,” he said. “So, much of the physical evidence is going to be gone. The memories of people are imprecise and probably the physical layouts of many places are going to be different than they were.”

One location the WHO team will likely focus on is the Huanan Seafood Market, which was linked to many of the first known cases of the virus, as well as research institutes and hospitals that treated patients in late 2019.

“All hypotheses are on the table as the team follows the science in their work to understand the origins of the COVID-19 virus,” the WHO said on Twitter.

“As members start their field visits on Friday, they should receive the support, access, and the data they need.”

“It’s imperative that we get to the bottom of the early days of the pandemic in China,” she said.

Zhao responded by saying that he hoped the “U.S. can work with the Chinese side in a responsible manner, respect facts and science, and respect the hard work of the international expert team in tracing the origin of the virus—so that they can conduct scientific research on the virus tracing without any political interference.”