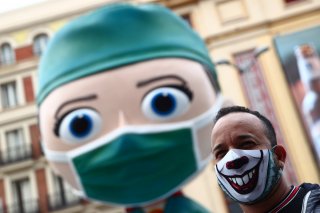 A more contagious coronavirus variant—known as B.1.1.7 and first identified in the United Kingdom—has the potential to stress hospitals worldwide if its spread isn’t quickly suppressed, the World Health Organization warned.

Currently, several U.S. states and dozens of countries have identified the new variant, which has been reported to be between 50 percent and 70 percent more transmissible. Several more nations have identified an additional variant, first seen in South Africa, that also appears to be more contagious, prompting them to reimpose stringent lockdown measures to curb further spread.

Moreover, the global health agency acknowledged that it was notified over the weekend of a new strain discovered in Japan. On Sunday, Japan’s National Institute of Infectious Diseases said it identified the variant in four travelers arriving from Brazil, adding that it’s difficult to immediately determine how infectious the new strain is and the effectiveness of vaccines against it.

“The more the virus spreads, the higher the chance of new changes to the virus,” WHO Director-General Tedros Adhanom Ghebreyesus said Monday during a press briefing in Geneva, Switzerland.

“This can drive a surge of cases and hospitalizations, which is highly problematic for health workers and hospitals already close to breaking point. This is especially true where public health and social measures have already broken down.”

Dr. Mike Ryan, executive director of the WHO’s health emergencies program, offered up a sports analogy when discussing the new variants amid the overall fight against the pandemic.

“(The variant) adds to the challenge you face because the opposition is bringing on some new players to the field,” he said.

“It doesn’t change what we need to do to win. It just changes the strength of the opponent and, in that sense, we have to take from that that we have to redouble our efforts.”

Tedros did note that the existing vaccines currently on the market seem to be effective against the mutations, though he admitted that they might need to be fine-tuned in the future.

On Friday, he asserted that the pandemic will not end unless there is a more equitable distribution of vaccines. Currently, there are forty-two countries that have begun to roll out their respective vaccine campaigns, but only six of those nations are believed to be middle-income countries, while no low-income ones have launched any sort of vaccination program, the WHO said.

Rapidly starting vaccine campaigns in poorer countries has taken on more urgency in recent weeks, as coronavirus cases and related deaths have surged to record highs. According to the latest data compiled by Johns Hopkins University, more than 91.3 million people worldwide have been infected with the virus and at least 1.9 million have died.