Why Many Libertarians Don't Agree With Trump On Coronavirus 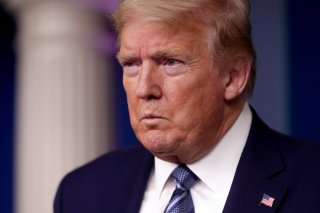 A much-revered Republican president, one of the most highly respected advocates of liberty in the history of Western civilization, and a much-admired Supreme Court Justice disagree with President Donald Trump’s call on governors to “liberate” the peoples of their states by reopening their economies now. Excuse me? Well, they all stated that one’s right to liberty is limited when exercising it is harmful to others. Abraham Lincoln stated, “My right to swing my fist ends where your nose begins.” John Stuart Mill wrote, “The right to swing my arms in any direction ends where your nose begins.” Oliver Wendell Holmes, Jr. held, “The right to swing my fist ends where the other man’s nose begins.”

Even if one strongly believes that liberty means that people can do what they deem fit with their own lives, one assumes that people will make reasonable decisions because they will have to live with the consequences. The 2018 Platform of the Libertarian Party states that “[i]ndividuals are inherently free to make choices for themselves and must accept responsibility for the consequences of the choices they make.” Hence, if they want to risk their lives and go about before wide-scale rapid testing is available (as well as before there are assurances that people who have recovered are no longer carriers nor can be re-infected), they should be free to do so. However, the obvious problem is that they are not merely endangering themselves, but all those they are coming in close contact with, including their families, people they work with, travel with, meet, and so on.

Even if the harm was only to self, there are strong reasons to protect people against their follies, as scores upon scores of studies conducted by behavioral economists (summed up in a bestselling book by Daniel Kahneman, Thinking, Fast and Slow) show that people are very poor processors of information, even when they are not exposed daily to conspiracy theories and demagogues. Hence, when the risks are as high as they are now, there is a strong case to protect people from themselves.

This issue came up when the government called for requiring people to wear seatbelts. Critics argued that the nanny state was out to coddle people, to create a risk-free society, soon to ban riding in hot air balloons, skydiving, and skiing. However, the risks in these sports are limited, especially once the government passed regulations to make them so. However, seatbelts are a very powerful tool to save lives. Seatbelts saved nearly 15,000 lives in one year alone. The current virus killed more New Yorkers in two months than the Spanish Flu killed in two years; it is 10 times more fatal than the flu (as of mid-March, the estimated case fatality rate for COVID-19 was 1 percent, compared to 0.1 percent for the seasonal flu).

The argument for public protection against high risks is further reinforced by the fact that people do not suffer the consequences of their poor choices alone; the public is often left stuck with the tab. Thus, when people ride motorcycles without helmets and they are killed, the costs of taking care of the families often fall on the state, and even if they are merely severely injured, their healthcare costs are often at least partly paid for by the public. The same will be the case for those who rush out, before “the virus tells us it is time,” as Dr. Fauci put it, that we have enough testing, contract tracing, and information about acquired immunity.

Hence, it is of special interest to review what several influential and highly-regarded libertarians have argued about the shelter-in-place policies which Trump assaults. These are public intellectuals who typically consider liberty to be the principle that trumps all others. Philosophy professor Michael Huemer wrote “Preventing the spread of infectious disease is within the legitimate functions of the minimal state, which most libertarians accept.” Similarly, fellow philosophy professor Dan Moller noted that, while libertarians are committed to individual freedom, they do not believe that freedom should come at others’ expense. He added that this idea allows libertarians to justify the government’s imposition of taxes on pollution. Moller believes that the current situation is analogous to pollution taxes: “What's weird about a pandemic is that our everyday behaviour suddenly puts others at risk — just showing up to work can have huge negative externalities. So libertarians see restrictions on individual liberty in a pandemic as akin to restrictions on pollution.”

David Boaz, executive vice president of the libertarian Cato Institute, explains that libertarians “believe in the presumption of liberty. But that presumption can be overcome in particular circumstances.” He supports organizations that have chosen to cancel events, such as the National Basketball Association and the National Collegiate Athletic Association. However, he sees that there is an argument for the government to take temporary emergency action to require private businesses to close or change their operations while the pandemic rages, as has happened with bars and restaurants, respectively.

True, some libertarians are even now opposed to the idea of the government enacting laws that regulate behavior. For example, libertarian Jim Babka, the editor-at-large for the Advocates for Self-Government, is opposed to the implementation of any such laws. He argues that “it’s impossible that a monolithic political response can be more resourceful than millions of people acting to protect their families and neighbours,” and he favors “voluntary social distancing.” Dan Fishman, the executive director of the Libertarian Party, refers to government action as “coercion” and raises the specter of a “slippery slope,” asserting that we should instead “try to persuade the heck out of people to do what's right.” One can hardly object to people doing what they must do on their own, encouraged by responsible leaders. However, one must ask these libertarians to have a look at the demonstrators who call for opening the economy now and assemble en masse, without masks or distancing. Can one merely rely on self-government?

If you need a break from these solemn deliberations, you can find some amusement on the editorial page of the Wall Street Journal. There, William McGurn argues that the elites are mocking the ordinary people who protest the mitigation efforts. The elites, he claims, call on the people to heed science, but, McGurn writes, what is so hot about science? There are many questions about the coronavirus for which science has no answers. Got it? Ignore what we do know because there some things we do not know yet! And, the general restrictions the authorities imposed in most states and nations are way too heavy, says McGurng—because in one case sheriff’s deputies arrested a paddle boater in the open ocean and in another some officials filled a skateboard park with sand.

Trump is not going to be troubled by the observation that his call to liberate people from sheltering in their homes is running afoul of the greatest thinkers of Western civilization, as well as many of the most influential contemporary libertarians. However, one wonders why there are scores of millions who follow him and do not hear these age-tested wise voices? This resistance has long been a sad commentary on populist democracy. These days it is tragic.

Amitai Etzioni is a University Professor and professor of international affairs at The George Washington University. His latest book, Reclaiming Patriotism, was published by University of Virginia Press in 2019 and is available for download without charge.