Will Coronavirus Push Iran Towards a National Economic Shutdown? 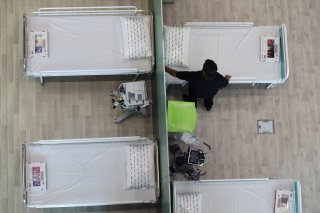 Iranian health minister Saeed Namaki said that the country is “playing a game of chess with the coronavirus right now” in a Monday press briefing as authorities struggled to implement a “smart distancing” policy.

Iran has rolled out “smart distancing” measures to control the novel coronavirus without shutting down Iran’s sanctions-battered economy. But health experts have warned that the only way to break the chain of transmission is to lock down the entire country, and authorities are already reporting issues in securing people’s compliance with the measures.

“We hope to control the first wave of this epidemic in late May or in June, but let’s not think that this vicious virus will leave us,” Namaki said. “It is possible that we have the presence of a new epidemic in the fall and winter, and we must be prepared for more difficult days.”

He emphasized that a vaccine could be two years away and that Iran only had 1.6 hospital beds per thousand.

The Iranian Medical Association had an even more dismal outlook. The quasi-governmental organization responsible for licensing doctors claimed in an open letter that the “smart distancing” policy was not sufficient.

“In scientific and epidemiologic assessments, the implementation of this model is possible and useful when the actual number of patients is so low that not only individuals—but also families—can be monitored and evaluated with accurate laboratory tests and active control of cases,” the statement said.

“The latest suggestion of the World Health Organization and many countries with similar conditions to Iran has been to extend effective controls and monitoring operations for a longer period until an acceptable level of prevalence for smart distancing has been achieved—at least until May 1,” the medical association’s letter continued.

The association noted that the smart distancing model also requires better training for personnel and better tools for monitoring and enforcement. It complained that malls, markets, and parks in Tehran have become “uncontrolled and unregulated.”

Authorities around the country have pleaded with the public to obey social distancing protocols.

The “smart distancing” policies divide the economy into “low-risk” and “high-risk” industries and require low-risk businesses to register with the authorities.

Health authorities in the suburbs of Tehran also shut down six sports clubs in Rey and an athletic field in Rudehen.

Arak County executive Hossein Bakhtiari complained to IRNA on Monday that people are not as cooperative as they were in the early days of the pandemic.

“In recent days, the streets of the city are full of crowds, and people do not take the advice seriously,” he said. “Families should have a detailed plan to leave their homes in necessary situations so that they do not have to go out every day—and are not under the impression that this disease is over.”

The current number of confirmed active novel coronavirus disease (COVID-19) cases in Iran is 73,303, including 4,585 deaths and 45,983 recovered cases, according to official statistics.

The daily number of new cases has been declining as of last week. The government claimed that 1,657 people had been diagnosed yesterday, down from a peak of 3,186 cases per day at the end of March.