Will Coronavirus Really Kill Off the Movie Theater? 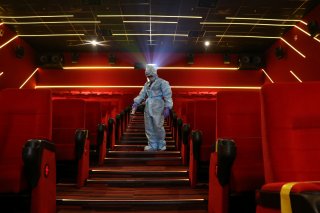 Perhaps it is about time to get those popcorn makers and soda machines ready to go.

According to a recent survey conducted by the National Research Group, which had been polling frequent moviegoers over three times a week since the start of the coronavirus pandemic over a year ago, nearly half of Americans are primed to return to movie theaters despite the still-high virus case numbers.

The poll’s data further revealed that teenagers and young men under the age of twenty-five were most comfortable with returning to cinemas at 60 percent and 62 percent, respectively.

However, only half of women under twenty-five were comfortable with returning to movie theaters.

Women who are over the age of twenty-five showed the most concern among all age demographics, with only 40 percent expressing confidence in heading back to theaters. But 77 percent of those respondents suggested that their confidence could rise as more people get vaccinated.

Meanwhile, men in the same age group were slightly more comfortable at 49 percent.

The latest data revealed that 47 percent of five thousand nine hundred movie theaters in the United States and Canada are currently open. Mississippi and Utah lead among states with the most open theaters with 80 percent, followed by Arizona with 77 percent, and Alabama and Georgia at 70 percent.

The industry received more good news recently when Gov. Andrew Cuomo announced that he would allow movie theaters in New York City, which have been shut down for nearly a year, to reopen with strict restrictions on March 5.

“Theater owners are pleased with the announcement that New York City movie theaters will be allowed to safely reopen,” the National Association of Theatre Owners said in a statement.

“Stringent voluntary health and safety protocols have made it possible for cinemas across the country to operate safely and responsibly at higher capacity limits for many months without a single outbreak of COVID-19 being traced to movie theaters.”

AMC Entertainment CEO Adam Aron acknowledged that all thirteen of its New York City locations can reopen on short notice and will likely be up and running on March 5.

“Governor Cuomo’s announcement that movie theaters can reopen in New York City in the first week of March is another important step towards restoring the health of the movie theater industry and of our company,” he said in a statement.

Movie theaters in the city will be able to reopen at 25 percent capacity or a maximum of fifty people. Cinema patrons will need to wear masks and socially distance, and theaters will need to comply with the Department of Health’s recommendations for air filtration and other safety standards.

Moviegoers, however, will not have to be tested for the virus prior to attending.