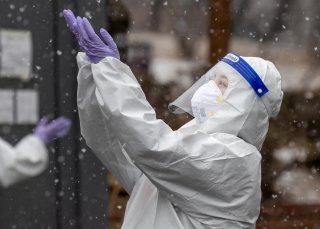 Symptoms of the novel coronavirus have been shown to linger for up to six months, according to a new study out of China that was published in the medical journal The Lancet.

The research focused on more than seventeen hundred individuals who were hospitalized with the virus in Wuhan, China, where the contagion was first detected over a year ago. Among those patients, roughly 76 percent exhibited at least one symptom six months after discharge.

The study’s findings indicate that people who recover from coronavirus infections, which have been confirmed in more than ninety-one million worldwide, could still suffer from long-lasting health impacts

“Because COVID-19 is such a new disease, we are only beginning to understand some of its long-term effects on patients’ health,” senior author Dr. Bin Cao, of the China-Japan Friendship Hospital and Capital Medical University, said in a news release.

“Our analysis indicates that most patients continue to live with at least some of the effects of the virus after leaving hospital, and highlights a need for post-discharge care, particularly for those who experience severe infections. Our work also underscores the importance of conducting longer follow-up studies in larger populations in order to understand the full spectrum of effects that COVID-19 can have on people.”

The researchers also discovered that some patients went on to develop kidney problems after being discharged. Lab tests revealed that 13 percent of patients whose kidney function was normal while in the hospital had reduced organ function in follow-up exams.

Another worrying finding was that follow-up blood antibody tests from ninety-four patients after six months showed that antibody levels were 52.5 percent lower than at the height of infection. The researchers noted that such data raise concerns about the possibility of coronavirus reinfections.

In a related commentary, Italian researchers highlighted the need for outpatient clinic services—though they did note that such a level of care is more difficult to attain in poorer countries.

Long-term studies “enable us to assess the efficacy of therapeutic interventions to mitigate the long-term consequences of COVID-19 on multiple organs and tissues,” they wrote.

“This is consistent with the syndemic nature of the COVID-19 pandemic, and has implications for the long-term follow-up of COVID-19 sequelae, which in most instances should be interpreted against a background of an array of non-communicable diseases and social and income inequalities that exacerbate the adverse effects of each of these diseases in many communities.”

They concluded: “Unfortunately, there are few reports on the clinical picture of the aftermath of COVID-19. The study . . .  is therefore relevant and timely.”