Could the U.S. Air Force's T-X Eventually Turn Into a New Light Fighter? 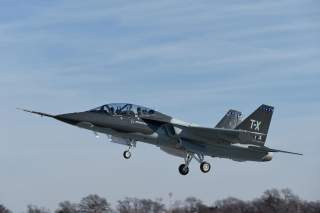 Earlier this week, a diminutive two-seat military jet aircraft took flight from a runway in St. Louis, Missouri. While superficially resembling a fighter aircraft, the jet was Boeing and Saab’s entrant for the U.S. Air Force’s T-X trainer competition. Unlike some of its rivals for the competition, the Boeing aircraft is specifically designed to meet the U.S. Air Force’s requirements to replace the long-serving Northrop T-38 Talon.

According to Boeing, during the nearly hour-long flight, the company’s chief T-X test pilot Steven Schmidt and chief pilot for Air Force programs Dan Draeger put the new jet through its paces during its first flight. “I’ve been a part of this team since the beginning, and it was really exciting to be the first to train and fly,” Schmidt said in a statement. “The aircraft met all expectations. It’s well designed and offers superior handling characteristics. The cockpit is intuitive, spacious and adjustable, so everything is within easy reach.”

While the Boeing T-X design is primarily geared toward the U.S. Air Force’s training requirements, the jet does have external hardpoints that could be used to carry weapons. Indeed, the Air Force’s requirements for the T-X program have a level of built-in flexibility in terms of space, weight, power and cooling so that the jet might be able to be adapted for other missions, such as playing the role of an aggressor—or it could be adapted into being used as a light attack aircraft.

At least one of the would-be T-X competitors—Lockheed’s T-50A—already exists in a light-attack variant. And for a time, Korea considered developing the T-50—which is derived from Lockheed F-16 Fighting Falcon—into a full-fledged light fighter, but chose instead to develop a new clean-sheet fighter. It is conceivable that Northrop and Boeing—both of which are developing new clean-sheet T-X designs—could market their aircraft as a light attack or light fighter—when equipped with the proper avionics.

There are plenty of U.S. allies and friendly nations around the world that could use a lightweight, low-cost fighter aircraft. Most of the U.S. fighters on the available market—the F-35 stealth fighter, F-15E Strike Eagle, F/A-18E/F Super Hornet and F-16C/D—are too expensive and too complicated for many nations. Indeed, a lot of countries simply don’t need a very sophisticated warplane—thus a fighter variant of the T-X could fill a niche that was once filled by a close cousin of the Northrop T-38—the F-5 Freedom Fighter.

Thus, while the initial T-X contract will be for 350 trainer aircraft, winning the tender could open the door to many future possibilities—not just with the U.S. Air Force, but with a host of American allies around the world.