Dr. Ben Carson for President: What You Need to Know 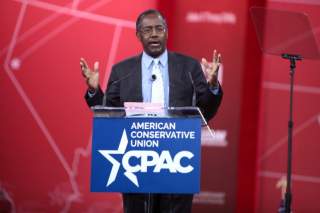 Americans have had presidents who were lawyers (more than two dozen of them), soldiers, land surveyors, farmers, and schoolteachers. Even a newspaper publisher, a mining engineer, and an actor have made it to the White House. But never in its history has the United States had a president who was trained as a medical doctor. That will change if Ben Carson gets his wish. The path breaking, and now retired, pediatric neurosurgeon formally announced yesterday that he has joined the increasingly crowded race for the 2016 GOP presidential nomination. The campaign marks Carson’s first bid for elective office. In case you are wondering, the last person to win the White House in his first bid for office was Dwight D. Eisenhower.

Carson made his announcement in his hometown of Detroit. He got straight to the point:

I’m Ben Carson and I’m a candidate for president of the United States.

Carson targeted domestic issues in his announcement. He said nothing about foreign policy. He did take on the charge that he is a political neophyte. Indeed, he embraced it:

Carson won’t be hitting the campaign trail right away. Two days ago, while he was practicing his announcement speech, he received heartbreaking news: his mother, who was diagnosed with Alzheimer’s disease back in 2012, is likely to die in the next few days. He canceled a scheduled trip to Iowa so he can fly to Dallas to visit her one final time.

Carson’s life is a rags-to-riches story. He grew up in a broken home in inner city Detroit. His parents divorced when he was eight after his mother discovered that his father was a bigamist. He was raised by his mother, who had a third-grade education and married at thirteen. He had a violent temper as a teenager and once stabbed a classmate with a camping knife—fortunately, the knife broke on the victim’s belt buckle.

Carson eventually turned his life around, partly through prayer and partly because his mother pushed him to develop his talents. He attended Yale University as an undergraduate and then earned his medical degree at the University of Michigan. His specialty was pediatric neurosurgery. He became the director of pediatric neurosurgery at Johns Hopkins University, one of the finest medical schools in the world, when he was just thirty-three. In 1997, he led a team that was the first to ever separate twins who were born conjoined at the head.

Carson became an instant conservative hero in 2013 when he used a speech at the normally non-political National Prayer Breakfast to give a minute oration that mixed charming stories with a denunciation of President Obama’s philosophy and policies. The president was sitting just ten feet away.

Carson has kept up his criticism of Obama ever since, sometimes using inflammatory language. He has compared Obamacare to slavery and the United States to Nazi Germany. He has repeatedly refused to apologize for the latter comment. He has said that there might not be an election in 2016 because “there may be so much anarchy going on.”

Carson’s medical successes made him a hero to many African Americans. He has lost much of that support, however, as he has taken to criticizing Obama.

Carson has no foreign policy experience, and his foreign policy misstatements have made headlines in recent months. He freely admits that when it comes to world affairs “I’m in the process of acquiring a lot of information” and “there’s a lot of material to learn.” When his friend Chris Wallace suggested that “putting Ben Carson in the Oval Office [would] be akin to putting a politician in an operating room and having him perform one of your brain surgeries,” Carson answered:

I don’t think so. I think what is required for leadership is wisdom and the ability to assemble an appropriate team. An ability to listen and ability to make wise decisions.

The obvious question is how closely linked wise decisions are to knowledge.

Carson has talked about ratcheting up sanctions on Iran, putting troops on the ground to fight ISIS, and keeping Putin from “reestablish[ing] an empire” by driving down the price of oil. When it comes to the Pentagon, he argues that “we are now in the process of not cutting out fat, but cutting into the muscle and cutting into the bone.” He has yet to say, however, what he thinks is the right level of defense spending.

Carson has written a memoir, Gifted Hands (1996), which later became a TV moviestarring Cuba Gooding Jr. His other books include two quasi-policy books, America the Beautiful (2012) and One Nation(2014). Carson also has a website.

GQ has profiled Carson, as have Politico, the New York Times, and New York magazine. The Baltimore Sun has detailed Carson’s 2016 prospects. A December Gallup poll named Carson the sixth most admired man in America. The Blaze offers seven fascinating facts about Carson, while NPR offers up five things you should know about him.

This piece first appeared courtesy of CFR here. Rachael Kauss assisted in the preparation of this post.