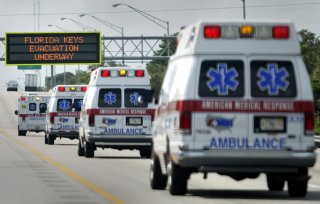 The Internal Revenue Service and the Treasury Department may nearly be done handing out coronavirus stimulus checks that were approved under President Joe Biden’s American Rescue Plan, but the state of Florida has promised that even more financial help is on the way.

“We know that the pandemic put an awful lot of strain on our first responders, EMTs, sworn law enforcement, firefighters and so we believe that we should recognize their sacrifice over the last year,” Florida Gov. Ron DeSantis stated upon the passage of the legislation, which was a part of the $101.5 billion state budget signed into law.

“Supporting our law enforcement and first responders has been a top priority for my administration, and it has never been more important than over the last year. As a state, we are grateful for their continued service to our communities. This one-time bonus is a small token of appreciation, but we can never go far enough to express our gratitude for their selflessness,” he continued, adding that he expects the funds to be issued by the end of the summer.

DeSantis also took time to acknowledge the selfless work that many educators took on during the pandemic.

“We’re proud of the teacher compensation momentum we have, and we’re proud of these $1,000 bonuses for principals and for the teachers,” he recently told reporters. “We think that when the schools are open, when people are working hard and putting the kids and families first, you know, we want to reward that sacrifice.”

Florida is following in the footsteps of other states like Maryland, New Jersey, and California in issuing their own “stimulus” checks to their residents.

The California legislature recently approved Gov. Gavin Newsom’s plan to disburse additional $600 stimulus checks, which have come to be known as “Golden State Stimulus II.” In all, California state officials are estimating that roughly two-thirds of all residents will receive some form of stimulus payment.

Moreover, tenants were given eviction protections for another three months and many will have all of their past-due rent covered.

“California will significantly increase cash assistance to low-income tenants and small landlords under the state’s $5.2 billion rent relief program, making it the largest and most comprehensive COVID rental protection and rent relief program of any state in the nation,” Newsom’s office said in a statement.

In New Jersey, its legislature recently approved a $46 billion state budget that green-lighted tax rebates of up to $500 for nearly eight hundred thousand households.