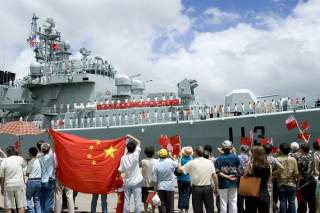 China may build a permanent naval base in a strategic African port.

On Sunday, Ismail Omar Guelleh, the president of Djibouti, told AFP that “discussions are ongoing” over Chinai building a military base in his country, adding that Beijing’s presence would be “welcome.” The country also hosts American, French and Japanese military installations.

“France's presence is old, and the Americans found that the position of Djibouti could help in the fight against terrorism in the region," Guelleh said during the interview.

“The Japanese want to protect themselves from piracy — and now the Chinese also want to protect their interests, and they are welcome," he added. The report went on to say that China would likely establish the base at Obock, Djibouti's northern port city.

When asked about the report, Chinese Foreign Ministry spokesperson Hua Chunying refused to deny its veracity, and in fact stopped just short of confirming it.

“We have noted the relevant report,” Hua said, before adding:

China and Djibouti enjoy traditional friendship. Friendly cooperation between the two sides has achieved constant growth over recent years, with practical cooperation carried out in various fields. What needs to be pointed out is that regional peace and stability serves the interests of all countries and meets the aspirations shared by China, Djibouti and other countries around the world. The Chinese side is ready and obliged to make more contributions to that end (emphasis added).

China has long participated in an international anti-piracy operation in the Gulf of Aden, near where Djibouti is located. As Hayes Brown notes over at Buzzfeed, some in China have previously raised the possibility of Beijing establishing naval bases on the African contentintent. About five years ago, one top Chinese admiral was quoted as saying that ““I think a permanent, stable base would be good for our [anti-piracy] operations.” However, China’s Defense Ministry quickly shot down the idea, stating that: “Some countries have set up overseas supply bases (but) the Chinese fleet is currently supplied at sea and through regular docking (in the Gulf of Aden region).”

Djibouti already hosts Camp Lemonnier, which serves as the primary base of operations for U.S. Africa Command (AFRICOM) in the horn of Africa. The base is used primarily to conduct counterterrorism operations in the region, including launching unmanned drone attacks.

Japan opened its own base in Djibouti back in 2011 to bolster its ability to conduct anti-piracy operations in the region. Before then, the Japanese Maritime Self Defense Force (MSDF) had been using Camp Lemonnier as its base of operations. Earlier this year, Japan’s Defense Ministry announced that it would be expanding the operations it conducts from its lone foreign operational base.

The negotiations over establishing a naval base in Djibouti underscores China’s desire to bolster its presence in Africa. Back in 2014, China and Djibouti inked an agreement that gives the Chinese military access to Djibouti port. China is also heavily invested in infrastructure projects in Djibouti’s landlocked neighbor, Ethiopia.

As I’ve previously argued, China is better positioned to prevail over the United States in their ongoing competition for influence in the region.