Here's How China And America Would Fight Over The Senkaku Islands 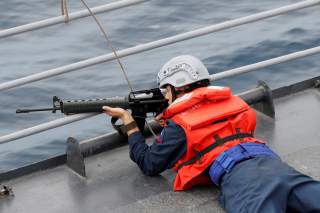 A week after the war, however, change was in the air. On the Chinese Internet, some posts that were critical of the government escaped censorship. At first, criticism was veiled and humorous: “Who can say what the conclusion to the New Sino-Japanese war was?” “Word on the street is that a certain party was defeated” “It is rumored that an island was completely lost.”

Online criticism gradually grew more direct: “The new Sino-Japanese war is another national shame!” “The east sea territories were lost under humiliating terms!” “Put aside the Senkaku Islands, usher in a New China!” “Down with the corrupt government!”

Some of these posts were deleted, but still others remained, inspiring debate amongst the populace. It was subsequently learned that the loosening of Internet supervision was not official policy, but the doing of some online censorship workers who decided to let netizens vent their anger.

The Internet discussion soon found its way onto WeChat, the mobile messaging service. Before long, web protest turned into street protests. College students started leaving their campuses in droves and held aloft their Internet slogans on banners: “The new Sino-Japanese war is another national shame!” “The east sea territories were lost under humiliating terms!” “Put aside the Senkaku Islands, usher in a New China!” “Down with the corrupt government!”

In major cities across China, regular citizens started joining the college students in the streets, first in the hundreds, then eventually in the tens of thousands and upwards. Military and police officers, armed to the teeth, were mobilized and placed on standby. But they refused to suppress the students and citizens, as though they were waiting for some kind of order.

This situation persisted for days. Posts on the Chinese Internet calling for the Chinese regime leader to resign suddenly surfaced, and these were mysteriously not censored. People realized that the top leader hadn’t made a public appearance for several days, a fact that went unreported in the press. Party media soon started carrying scholars’ reflections on the Sino-Japanese war.

Chinese scholars said: “The war could have been avoided, but some of us were unbelievers!” “Speaking truthfully, nobody provoked us. It wasn’t Japan that challenged us, but we who challenged others.” “Matters shouldn’t have reached this stage; it’s all because some members of our top leadership leaned too far left, were too stubborn and thought themselves infallible!” “Making enemies on all sides and turning all neighboring countries hostile; what sort of leadership skill is this?”

Finally, China Central Television ran a major breaking news item: The Chinese leader announced his resignation over China’s defeat in the Sino-Japanese war during a Politburo meeting in Beijing. His positions of Party general secretary, premier and Central Military Commission chairman were to be taken over by other members of the present leadership—the premier would become the general secretary, the Party vice-chairman would become the chairman and the head of the Central Commission for Discipline Inspection would take over the military. Various news channels verified that in actuality, a coup d’etat had taken place, and the former Chinese leader, a hawk, has now been sidelined and put under house arrest. The new Chinese leadership urged national unity and stability, and called on the country to look forward.

Meanwhile, more and more Chinese citizens took the streets, calling for political reform. In all major cities, protesters turned out in the hundreds of millions and made their demands: end corruption, end dictatorship; introduce democracy, human rights and the rule of law.

Which direction will China go? The world is watching.

Chen Pokong is a veteran of the Tiananmen Square democracy movement; he has authored over ten books, writes a regular column for Radio Free Asia, and is regularly invited to speak on Voice of America Chinese. This chapter was translated by Larry Ong, a China news reporter with Epoch Times based in New York City. This first appeared last year.