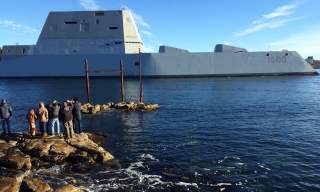 There’s no denying that the Navy’s newest destroyer, the USS Zumwalt, looks sleek is hell on the outside, and watching it fire off 10 sweet Long Range Land-Attack Projectile rounds in a minute is enough to bring a tear to any patriot’s eye.

But what’s it actually like inside the Zumwalt? Probably not what you expected, at least according to a new video tour of the vessel above.

The sneak peak, produced by AiirSource Military, starts out with a cinematic classic: the toilet shot. But don’t worry, things improve as the video moves on to the control room, medical facilities, fully-equipped gym, and — some random sailor ironing a shirt. It’s an interesting look at life aboard the “most technologically advanced surface combatant in the world.”

Part of the DDG-1000 class, the General Dynamics Bath Iron Works-built Zumwalt was designed to carry out a range of deterrence, power projection, sea control, and command and control missions, according to the Navy. Construction began in 2008, with a set commission date of 2013, but delays pushed it back to October 2016.

But the ship already has a tumultuous history. The program was originally slated to deliver 32 ships meant to replace Navy’s fleet of Arleigh-Burke class destroyers as the branch’s multi-mission stealth vessel of choice. But each unit costs roughly $4 billion, and because of cost overruns, Congress defunded 29 of the ships and ordered the continuation of the Arleigh-Burke program instead.

Today, the vessel is the first of only three Zumwalt-class ships — and things aren’t of to a great start. Just a month after it hit the open sea, the destroyer’s crew uncovered a seawater leak in the auxiliary motor drive oil system. The engineering malfunction, which occurred near the Panama Canal before the ship even made it to sea trials, required two weeks of repairs.

But hey, it does look really cool. Plus, its gun system is capable of firing 600 rocket-powered projectiles and hitting targets more than 70 miles away, including on land. Too bad the Navy can’t afford the ammo at $800,000 a round.