Hitler Paid a Heavy Price for Underestimating the Higgins Boat 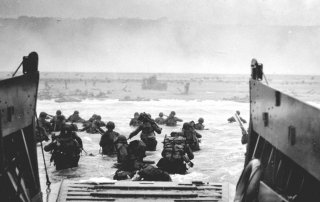 Here's What You Need to Remember: The boat’s usefulness could not be overstated. Dwight D. Eisenhower, the Supreme Allied Commander sang Higgins’ praises, stating that “Andrew Higgins is the man who won the war for us.” He went on to explain, “If Higgins had not designed and built those LCVPs, we never could have landed over an open beach. The whole strategy of the war would have been different.”

The boat’s usefulness could not be overstated. Dwight D. Eisenhower, the Supreme Allied Commander sang Higgins’ praises, stating that “Andrew Higgins is the man who won the war for us.” He went on to explain, “If Higgins had not designed and built those LCVPs, we never could have landed over an open beach. The whole strategy of the war would have been different.” A resounding endorsement from one of the greatest generals of one of the greatest wars.