How America Can Save the Liberal World Order 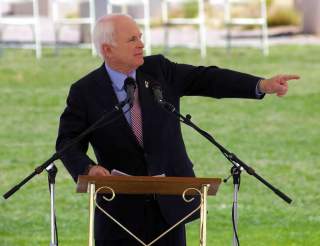 In a March 26 speech at the Center for Strategic and International Studies (CSIS), Senator John McCain (R-AZ), the Chairman of Senate Armed Services Committee, narrowed his defense priorities for the 114th Congress down to three categories: strategy, budget, and acquisition management reform.

McCain said that for the past three months, leaders in various sections of the United States all conveyed one similar message: the United States is experiencing a nearly unprecedented period of global turmoil that could undermine the liberal world order. He quoted Henry Kissinger’s remark to the Committee in January, saying that the United States has not faced more a diverse and complex array of crises since the end of World War II.

McCain worried that increased threats and American isolation could constitute the greatest challenge to the integrity of the liberal world order. He argued that in the past the United States has maintained global order through an emphasis on military strategies. “For seven decades, the liberal world order that America and our allies painstakingly built has expanded prosperity and kept peace,” he said, “we have deterred aggression, defended allies, defeated adversaries and built peace through strength.”

McCain particularly pointed out that “states like China, Russia, and Iran threaten to revise and roll back key tenets of liberal world order.” He admitted that every method, including diplomatic and economic approaches, should be incorporated into American strategy. However, “acknowledging that there is no military solution should not lead us to believe that there is no military dimension,” he added.

Referring to his second priority as Chairman of Senate Armed Services Committee, he emphasized the need for ending sequestration and putting a strategy-driven defense budget into place. McCain explained to the audience how sequestration has negatively impacted American power. “Sequestration has done lasting damage to the capabilities, readiness, morale, and modernization of American armed forces.”

With regard to the budget, he noted that the Republicans cannot only talk tough on defense, but also must be willing to pay for it. “This is a crisis of Washington’s own making,” he said, referring to sequestration. To solve this, Congress must rebuild the bipartisan consensus to sustain the liberal world order.

Finally, McCain spoke about his third priority—acquisition reform and technological innovation. “We must also establish alternative acquisition paths to get innovative capabilities to our warfighters in a month, not decades.” He pointed out that recently, technological innovations with defense applications have been swift, especially with regards with cyber-robotics and miniaturization, which the United States has failed to keep up with.

“In short, the [current] defense acquisition system itself increasingly poses a threat to our future military technological dominance,” McCain said. For the past few decades, U.S. adversaries have been rapidly improving their militaries to counter America's unique advantages. He also pointed out that the Department of Defense has gotten larger only to become more vulnerable to advanced technology. Sequestration is to blame, he argued. “We must create better incentives for innovation by removing unnecessary legislative and regulatory barriers.”

“A liberal world order is being seriously stressed,” McCain concluded. “It does not have to be this way. Nowhere is it preordained or inevitable that America power must decline. That is a choice and it is up to us. We can choose a better future for ourselves but only if we make the right decisions.” The United States ought to start making smart decisions to effectively counter threats to cherished American values.

Ju-Yeong June Shin is a senior at Seoul National University. She is an Asan young fellow from the Asan Institute for Policy Studies and currently interning with the China and Pacific Team at the Center for the National Interest.