How India’s Ambitious Reforms Have Changed Its Economy 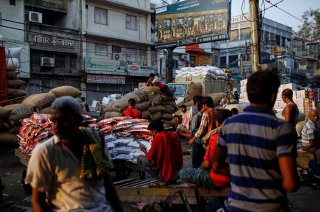 Over the past few months, the Indian government has made the biggest strides towards the free market since the early 1990s. In the face of a shrinking economy during the coronavirus crisis, the BJP government unveiled sweeping reforms in the agricultural sector through a series of farm bills and unveiled a free-market-friendly budget in January 2021. Despite lengthy protests over the farm bills, the exit of the BJP's long-standing ally in the governing NDA coalition, and a victory in recent elections in Punjab by the opposition Congress Party, the government of Prime Minister Narendra Modi is taking decisive steps to move India away from its historical socialist positioning.

The biggest reforms allow farmers to sell their harvest outside inefficient government-approved marketplaces, while others are related to further deregulation in the agricultural sector. The primary goals are to unburden India’s farmers from red tape, corrupt middlemen, and inadequate infrastructure. For too long the heavy hand of the state made India’s farmers beholden to predatory middlemen who burdened them with licensing and commission fees. Anachronistic business and financial regulations squeezed private players out of the agricultural sector. Middlemen began offering high-interest loans to poor farmers in exchange for guarantees to sell their harvest at low prices to the middlemen. Selling the crops in volume and at inflated prices enriched the middlemen, hurt the Indian consumer, and impoverished the farmer. This exploitation also resulted in the consolidation of farmland over decades, and many farmers neither owned their land nor its harvest. Local politicians took advantage of the situation by working with the middlemen and promised handouts from the central government in exchange for votes. The agricultural reforms give farmers more freedom and aim to increase private investment and agricultural output to the tune of hundreds of billions of dollars. The undoing of the old system was bound to generate rage amongst those who won big under it, such as middlemen, as well as those who benefited from government-endorsed monopolies.

The desire to lift the curse of socialism is also strikingly clear in the 2021 budget. The budget seeks extensive privatization—looking to end government involvement in numerous sectors in the most ambitious plans in nearly twenty years. In some ways the Modi government’s budget is radical—it is the first one since 1947 to contain the word “privatization” but in other ways it harkens back to relatively recent reforms. In the early 1990s, India’s socialist economy threatened the state itself—there were two weeks of foreign exchange reserves left when then Prime Minister PV Narasimha Rao launched ambitious reforms to end the ‘license raj’ and loosen FDI restrictions. Like the farm bills of 2020 the 1991 reforms were bitterly opposed by domestic interest groups and parties across the political spectrum; but just like the latter proved to be a godsend for the Indian economy, there is reason to believe the former will as well. Modi’s previous budgets were more about setting a baseline for good governance and proving he would take care of India’s poor but after a smashing victory in 2019, he has set about remaking India’s economy by backing ambitious free-market reforms. Modi himself made an impassioned plea for privatization in a speech echoing Milton Friedman by saying, “the government has no business to be in business.” Alongside the farm laws, the government aims to introduce reforms in banking, finance, corporate tax rates, and transportation, among others.

With America looking to diversify its supply chains in strategic areas as a bulwark against China, there was already an appeal to set up shop in India. Defense ties between the two nations have grown to $21 billion and will continue to get stronger to counteract China’s ambitions. These ties go beyond defense—U.S. companies like Google are already beta testing products in the Indian market before launching them stateside. Companies sense that there is a massive user base up for the taking and with these reforms aiming to lift millions from poverty, it is likely that base will grow and contribute billions to both the American and Indian economies.

While the farm bills have led to sustained protests and sparked international controversy, the reforms as a whole are part of a halting but gradual transformation of the Indian economy over the past thirty years towards the free market and away from the heavy hand of state interference. The start of this new era signals an India open for business not just domestically but internationally.

Anik Joshi is a public affairs professional in Washington D.C. who has written about South Asia for numerous publications.

Modi's Big Win: A Chance for Stronger Ties with America?