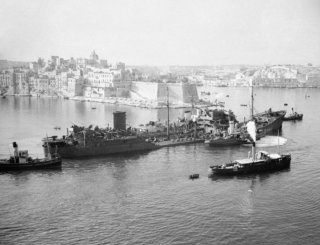 The tanker SS Ohio had to make it to Malta—or the Mediterranean island’s defenders were doomed.

With that 11,500 tons of kerosene and diesel fuel in Ohio’s capacious holds, British submarines and bombers on the island go on the offensive and stomp on the jugular of the supply lines fueling and feeding General Erin Rommel’s Afrika Korps in North Africa.

But without that fuel, Spitfire fighters based on the island would soon be unable to defend supply convoys from marauding Axis bombers based short distance away on Sicily. And that meant the 270,000 troops and civilians on the island would have to surrender or succumb to starvation.

Ohio was possibly the largest and fastest tankers on the planet when she was launched by the Texas Oil Company in 1940. These qualities led to her commandeering by the British government in July 1942 and her reassignment with a British crew under captain Dudley Mason.

Already heavily armed with a 5” stern gun, a 3” flak gun on the bow, and six rapid-firing 20-millimeter and one 40-millimeter pom-pom cannons, the Brits further fortified Ohio with rubbering bearings, steel springs and timber.

In August 1942, Ohio set sail from Scotland part of a convoy of thirteen other merchant ships bound for Malta, protected by the powerful battleships and aircraft carriers of Force Z. As described in a companion article, an onslaught of Axis submarines and bombers that sank the carrier Eagle and crippled a destroyer—but failed to sink any of the merchant ships.

But by 7 PM that day it was time for the powerful warships of Force Z to turn around, while four light cruisers (Cairo, Kenya, Manchester, and Nigeria) and eleven destroyers in Force X shepherded the transport ships on the last 300 mile-stretch to Malta.

But just 40 minutes after Force X assumed its station the convoy the situation fell to pieces as the convoy cruised into an ambush by five Italian submarines.

Captain Renato Ferrini’s submarine Axium unleashed all four frontal torpedo tubes in a spread angled to threaten the two “columns” of the convoy 1,300 and 1,800 meters away.

William Cheetham, a gunner aboard the destroyer HMS Penn, described what happened next in an account contributed to the BBC:

We had not been in position two minutes when a terrific explosion shook us from stem to stern, and its echoes had hardly died away, when another, just as loud as the first, followed and then two more. Looking to starboard, we saw a nerve-wracking sight.

Two cruisers, the Nigeria and Cairo, an oil tanker and another cargo ship were all hit. The Nigeria was listing heavily and we feared she was going to turn turtle. The Cairo was rapidly sinking by the stern. The oil tanker, well she had been blown clean to hell, and all that remained of her was a large patch of blazing oil and some wreckage…

Indeed, the torpedo blasted open a 7x8 meter wide hole portside the Ohio that blew out the starboard side as well. But the huge kerosene fires were soon put out by sea water gushing through the rupture, so she resumed crawling towards Malta at 13 knots.

The Nigeria, flagship of Force X, was left listing, on fire and flooded with fifty-two crew dead—but managed to limp back to Gibraltar while Burrough transferred to the destroyer Ashanti. The stern-less Cairo, though losing only twenty-two hands, had to be scuttled.

Force X had lost both cruisers designed to radar-direct carrier-based fighters for air defense. This proved disastrous just as 37 Luftwaffe He-111 and Ju-88 bombers hefting torpedoes and bombs swooped down, covered by six twin-engine Me-110 fighters.

The Clan Ferguson was steaming along--a fine-looking ship of around 12,000 tons, at approximately fourteen knots--following in our wake. I saw three Junkers Ju-88s diving from astern but could not bring my gun to bear because of the training stops. In any case our after guns had opened up. They hit the leading aeroplane but not before he had let go his bombs, scoring direct hits. It was a sight I shall never forget ... one minute there was this fine vessel, the next a huge atomic-like explosion and she had gone, disappeared with just a blueish ring of flame on the water and a mushroom of smoke and flame thousands of feet into the sky.

The other two Ju88s were caught in the blast and never reappeared, but that was a poor price to pay. Huge chunks of blasted ship splashed into the sea close to me, I thought some of the stern of Charybdis must have been struck.

Heinkel torpedo bombers also glided down upon the earlier-damaged transport Deucalion at 9 PM. A torpedo released at near point black range detonated inside a hold full of aviation fuel, ceiling Deucalion’s fate.

Simultaneously, Italian submarine Alagi crept into attack position and pumped out a four-torpedo volley at the Kenya. The crew spotted the incoming tin fish and wended the cruiser around three of the torpedoes. The fourth blew off a huge chunk from her stern, forcing Kenya to retire.

Attack of the E-Boats

Force X was now down to just one undamaged light cruiser, HMS Manchester. But at half-past midnight, four German S-Boots and thirteen Italian MAS motor-torpedo boats swarmed down on the disarrayed convoy, benefitting from illumination provided by the Cape Bon lighthouse.

Manchester dodged torpedoes while her triple gun turrets belted out 6” shells at the motor boats as if swatting at gnats with a baseball bat, damaging S-Boot S-58. But then MAS boats MS-16 and MS-22 closed within point-blank range and torpedoed the cruiser, flooding Manchester’s boilers, magazines and fuel tanks and knocked out all but one propeller.

The cruiser Charybdis and two destroyers were detached to reinforce Force X, and arrived at 5:30 AM as the convoy’s scattered survivors reorganized.

But with daylight came a renewed air assault 42 Luftwaffe Ju 87 and Ju 88 bombers escorted by sixteen Me-109 and Me-110 fighters. A stick of four bombs struck the freighter Waimarama, causing a massive explosion (pictured here) that consumed the bomber and nearly the nearby Melbourne Star and Ohio. British ship rescued 29 survivors out of the ship’s company of 116.

Twenty minutes later eight Italian Ju-87s covered by MC-202 fighters harried the damaged Ohio, which blasted two Stukas out of the sky—only for a crashing dive bomber to bounce up from the ocean and smash into the ship’s foredeck and bridge!

Another flight of five torpedo-armed SM-79s skimming at low altitude nearly struck the freighter Port Chalmers, but the tin fish snagged on the wire of an anti-torpedo paravane (picture here).

Additional near misses plastered the water around Ohio, knocking out her electricity and fuel pumps multiple times and snuffing out her boiler fires, forcing the crew to restart the turbine. Finally, as smoke poured from Ohio’s engine room, the crew abandoned ship at 11 AM—but then Commander Swain of the Penn decided to tow the huge tanker with a line of Manila hemp rope and the crew reboarded.

Unfortunately, the 1,800-ton destroyer was unable to shift the 9,300-ton tanker. And while attempting to do so, a doomed German bomber skipped a bomb into Ohio that broke her spine, leaving a tear that threatened to split the tanker entirely in two.

Undeterred, the 735-ton minesweeper Rye joined forces with Penn. Together, they managed to shift the tanker forward at 5 knots.

Fortunately, Malta’s Spitfire and Beaufighter squadrons were now in range to fly to the convoy’s rescue, shooting down several Stukas, an SM-79 and a Me-109 for two losses.

Still, Stukas managed to sink the transport Dorset at dusk and compelled Ohio’s crew to abandon ship a second time. But then the destroyer Ledbury rejoined the Penn and teamed up to resume towing the stricken tanker. Crews from sunken ships, including American merchant marines from the Santa Elisa, even reinforced the Ohio’s crew to man her guns.

A rotating patrol of sixteen Malta-based Spitfires began covering the desperate towing operation. The Italian Regia Aeronautica surged twenty-four equally-capable MC-202 fighters and a handful of Stukas in a last-ditch assault, but the RAF shot down a half-dozen Italian aircraft without loss. However, a thousand-pounder from a Stuka struck another near miss behind Ohio, snapping her tow lines and nearly flooded out the sinking ship.

Ledbury defeated two SM.79 torpedo bombers that sought to end her, while Brisbane Star survived impacts from two dud Italian torpedoes and was nearly seized by the Vichy French off Tunisia.