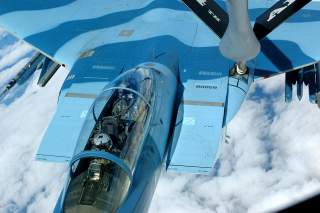 This week, The Critic published Looking Back: World War III Remembered, a piece reflecting back on the great war of 2029. The fictitious article tries to grapple with how a nuclear war between the United States and China took place, examining discussions at the very top in both governments shortly before it took place. The article suggests the trigger was a near-replay of a similar crisis in 1996--but one that had a much more devastating outcome.

The origin of the war, the article explains, was the aggressive rise of China. America, on the other hand, “the weary titan, grew scared of China’s rise and the defection of allies”. In the article, the United States makes the decision to decouple from China and recouple with Taiwan, a policy that triggers, “enhanced arms sales, diplomatic contact, naval port visits, even sailing a carrier through the Taiwan Strait”.

Meanwhile, on the ground in Taiwan, the article explains, “without warning, Taiwan’s president announced a referendum on independence. Beijing responded with a total blockade, demanding it acknowledge ‘One China’.” In response the United States decides to send two carrier battle groups to the Taiwan Strait, either to stage a counter-blockade against China or break the blockade against Taiwan. We never know what course of action Washington ultimately decided to take.

In response to the U.S. deployment, China decides to launch a “Sunshine Bomb”, a nuclear detonation far from U.S. or Taiwanese forces that shows resolve. If that failed to work, the People’s Liberation Army would stage a limited attack against the carriers. We can infer that the “Sunshine Bomb” did not work, nor did any effort on either side to limit the scope of the war, as we know that ultimately the conflict spun out into an all-out nuclear war.

The United States makes a grave strategic error in the article, moving two carrier strike groups near the Taiwan Strait. Although aircraft carriers are the U.S. Navy’s greatest assets, the six thousand or so personnel on each ship make for a serious problem in a crisis. The total loss of one carrier would cause almost as many casualties as those suffered on 9/11 and Pearl Harbor combined. The loss of a carrier would create a demand to dramatically escalate any conflict, more so than the loss of any cruiser, destroyer, or submarine.

In real life, Washington would not move carrier battle groups near the strait in an actual war crisis. At the strategic level, moving carriers into the Taiwan Strait is needlessly inflammatory. At the tactical level moving ships into such a position makes them less capable of defending themselves if shooting does break out.

A carrier battle group near the Chinese mainland is in a precarious position that plays to all of Beijing’s strengths. Warships operating in the Taiwan Strait have restricted freedom of maneuver, and would be within range of a multitude of Chinese weapons, from short-range fighters and missiles to longer range anti-ship ballistic missiles such as the DF-21. Any fleet near the mainland would be bombarded with Chinese radar signals, electronic warfare jamming, and likely need to track literally hundreds of air, surface, and subsurface contacts generated by hundreds or even thousands of Chinese weapon systems, preparing to defend itself at a moment’s notice. U.S. forces would have minimal time to respond to an attack. Overall, the risk to U.S. forces outweighs the message sent.

Instead, a U.S. fleet would farther off the Chinese coastline, out of range of most Chinese weapons, while still maintaining the ability to project protective power over Taiwan. A fleet could hold north of the Philippine island of Luzon, or west of Japan’s Miyako Strait. There, in the open ocean, a carrier strike group can most efficiently manage its own defense while still defending Taiwan from air and missile attack.

A carrier fleet farther from Taiwan and the mainland would be closer to friendly assets, particularly U.S. Air Force aircraft based at Kadena on the island of Okinawa. From there, E-3 Sentry aircraft can supplement the carrier’s E-2D Hawkeye airborne early warning and control planes to provide an aerial picture of the battlefield. Kadena is also the home of F-15C fighters, which could escort support aircraft and augment air coverage over the strike groups. Perhaps most importantly, aerial refueling aircraft such as the KC-135 Stratotanker would be able to provide refueling support to carrier aircraft, extending their mission length and range.

Perhaps most importantly, at a strategic level not actually entering the Taiwan Strait gives both sides a de-escalatory offramp. The United States could claim that it still defended Taiwan, an entirely true notion, while China could wave off escalation on the grounds that U.S. forces did not actually cross the red line of entering the Strait.

A conflict between the United States and China could well start with Taiwan as a flashpoint, but it would take colossal strategic and tactical missteps by all parties to make the war scenario in the article real. Then again, wars are often the result of missteps and the consequences they inevitably trigger. Regardless of how it starts, the world must understand the danger of nuclear war between two major powers.