Iran’s Economy is Growing, But So Is Iranian Discontent 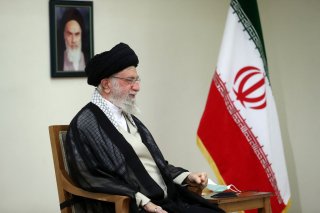 The Iranian economy is growing at an impressive rate, but daily strikes and protests have become the norm. The benefits of growth do not appear to be trickling down to the Iranian people, although rampant inflation keeps pushing down the value of their wages. Rather than the people, the likely beneficiaries of growth are corrupt officials and the security apparatus responsible for keeping the people down while waging proxy wars abroad.

Real GDP increased 4.3 percent in the Persian year of 1400, according to Iran’s Statistics Center. The oil and gas sector experienced the fastest rate of growth, as it did the previous year. But the service sector, the economy’s largest, also grew 4.5 percent, whereas previously it shrank.

The country’s foreign trade also continued growing. In the first quarter of the Persian year of 1401 (spring 2022 on Western calendars), non-oil foreign trade grew by 19 percent, quarter to quarter, reaching $25.5 billion. That figure consisted of $13 billion in exports and $12.5 billion in imports, generating a trade surplus of half a billion dollars. The good news from the first quarter follows the export of $48 billion of non-oil goods last year, the highest amount in the country’s history.

The country’s export of oil has also increased. An informed source at the oil ministry told pro-regime media that Tehran exported more than one million barrels of oil per day in the spring of 2022, bringing in 60 percent more revenue than in the spring of 2021.

Despite these trends, Iranians remain angry. Retirees marched across the country last month. In Isfahan they chanted, “Sedition of  ‘57’ is the cause of nation’s poverty”, ‘57 referring to the Islamic Revolution of 1979, or 1357 on the Persian calendar. The media also reported several labor strikes and teachers protests across the country, while the regime arrested tens of teachers.

Regime officials accuse “foreign hands” of being behind the strikes and protests and warn of conspiracies to create a gap between the “system” and the people. A recent poll shows only 28 percent of Iranians are satisfied with the performance of President Ebrahim Raisi. His administration brags about growth, but the only growth Iranians see is growing prices.

The country’s twelve-month point-to-point inflation in June 2022 jumped to 52.5 percent, 13.2 percentage points higher than the previous month. Prices rose 12.2 percent in June alone, 8.7 points more than in May. Making matters worse, Raisi’s subsidies reform increased the inflationary pressure on essential goods such as bread, which comprises a large share of the basket of goods used by low-income Iranians.

Official and unofficial reports show that 30 percent of the Iranian population is living below the absolute poverty line. Experts and regime insiders estimate that the share of the population below the relative poverty line is 60 to 70 percent.

Why is Iran’s economic growth not translating into a better quality of life for Iranians? Inflation is part of the answer, but the problem runs much deeper. First, the regime is corrupt, even by its own admission, and the fruit of any growth goes first into the pockets of officials and their families. Second, while a minority of Iranians support the regime, that minority is concentrated in the massive machinery of oppression that includes the Basij paramilitary, the Islamic Revolutionary Guard Corps, the Law Enforcement Force, and the clergy. All of these groups receive preferential treatment in the distribution of financial resources and economic benefits. Third, the regime prioritizes foreign adventures over domestic prosperity, spending heavily on proxies like Lebanese Hezbollah and clients like Bashar al-Assad.

Despite the growth of the past two years, Iran’s real GDP is still smaller than what it was in March 2018, just before the United States withdrew from the nuclear deal and began re-imposing sanctions. Thus, what is left after regime insiders, supporters, and foreign proxies take their share is very limited and is further depreciated by the inflation that the Raisi administration’s subsidies reform is making so much worse.

Hence, protests and strikes are likely to continue and intensify over the next few months. The regime’s response is likely to be greater repression.