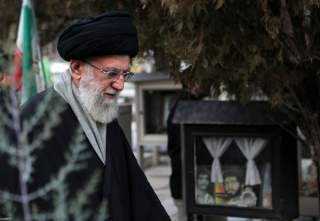 Ali Khamenei is, warns Ray Takeyh, “a first-rate strategic genius.” The Iranian leader, he argues, has bamboozled the West in the nuclear talks and is now on the verge of signing a nuclear deal that will allow him “to forge ahead with a nuclear program while safeguarding [his] regime and its ideological verities.” By attaining an agreement that “is technologically permissive and of limited duration,” the elderly cleric has “entered negotiations with the weakest hand and emerged with the strongest.”

It isn’t mad to interpret Khamenei’s latest moves as those of a clever tactician. Khamenei is a skilled player of Iranian domestic politics. He outmaneuvered his rival Akbar Hashemi Rafsanjani, who had helped Khamenei ascend to the supreme leader’s post in what many have interpreted as a bid to limit Khamenei’s power (since Khamenei lacked the religious qualifications and popular appeal needed to master the role). Khamenei has often managed to keep himself above the day-to-day political fray while still enforcing its boundaries and shaping its balances. And he’s slowly accumulated religious authority and financial clout. We’re not dealing with an old fool. But that doesn’t mean that Khamenei is on a path to victory in the nuclear talks.

First, while Khamenei has often been willing to move slowly, Takeyh’s reading of Khamenei’s intentions and goals suggests that the supreme leader is patient to Petrosian-like extremes. Under the nuclear deal rumored to be taking shape, Iran’s program would be under serious restrictions for ten years, and these restrictions would be lifted over the following five years. The deal, in other words, would sunset in 2030, having entered twilight in 2025. And Iran would likely need some measure of time—months, years—after the sunset to develop a useable bomb even if it chooses to do so immediately. The Iranian nuclear program will have existed without attaining its putative goal for more than four decades. In this time, Iran would have continued to live without the deterrence provided by a nuclear weapon.

Even if Khamenei is confident that President Obama won’t go to war with him, that confidence only gets him to early 2017. If Khamenei wants the bomb to scare off his enemies, does he believe that the next decade and a half will not be dangerous? If, on the other hand, Iran is aiming for an offensive nuclear weapon, why is Khamenei giving his targets so much time to prepare and to build up nuclear arsenals that would overshadow his even more vastly than they already do?

Second, Takeyh’s assertion that there will be “no legal limits” on Iran’s nuclear program and that “Western powers will have no recourse” after the expiration of a deal is simply not true. Iran would remain under the verification provisions of the nuclear nonproliferation regime, including those which assure the peaceful nature of a nation’s nuclear program. Iran would face the same risks—sanctions, isolation, military action—that it does today if it maneuvered toward nuclear breakout. And if the nonproliferation regime fails to put a nuclearizing Iran back at the top of the international agenda, but the United States and Israel develop concerns of their own, well, history does not suggest that either state will bow to international law or the whims of the international community when it perceives its national interests to be at stake.

Third, we must consider whether any viable policy path could allay Takeyh’s concerns. If Takeyh’s reading of the situation is correct, but there is nothing we can do to obtain a better outcome, Takeyh’s essay is a mere historical analysis. A viable alternative doesn’t seem to be in the cards. The Iranians, after all, have yet to show interest in an agreement with no sunset, even as the negotiations have been extended twice, so we can’t expect that they’d change under the current negotiating framework.

On the other hand, allowing these talks to break down while tightening sanctions would be an enormous gamble. We’d have (again) humiliated the factions in Iran’s government that have sought negotiations with us, empowering their critics and strengthening the narrative that the United States simply cannot be trusted. The Iranians would likely resume their riskiest enrichment activities and claw back the other concessions they made at the beginning of the current round of talks. More centrifuges would be built, letting them enter the next round of talks with a fait accompli even bigger than the one we face now. Those moves toward a nuclear breakout that Takeyh suggests may come when a deal sunsets in 2025 or 2030 could instead come much sooner. War would be more likely—and war is merely an expensive way to kick the can a few years down the road. The talks remain the best attainable approach even if Ali Khamenei really has outfoxed us.